Pilot's supporters said he is camping in Delhi and is upset over a notice sent to him by the Rajasthan police, who claimed to have stumbled on a plot to topple the Congress government 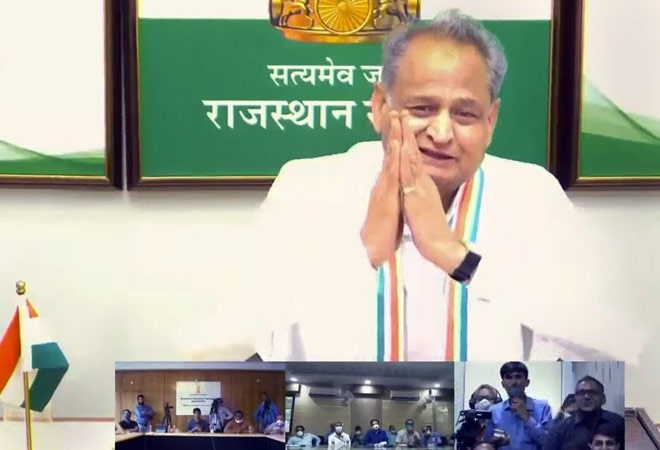 Rajasthan Chief Minister Ashok Gehlot has summoned Sunday night a meeting of all party MLAs that his deputy Sachin Pilot appeared set to skip, amid intensification of the power struggle between the two Congress leaders.

This will be followed by a meeting of the Congress Legislature Party in Jaipur on Monday morning, which is also likely to be attended by Avinash Pande, the All India Congress Committee general secretary in charge of Rajasthan, sources said.

Pande said he has not been able to reach Pilot, who is also the head of the state Congress unit, over the last two days. I have left messages for him," he told PTI, even as he asserted that there was no threat to the Congress government in Rajasthan.

Pilot's supporters said he is camping in Delhi and is upset over a notice sent to him by the Rajasthan police, who claimed to have stumbled on a plot to topple the Congress government.

The notice from the Special Operations Group (SOG) seeks time from him to record a statement.

The same notice has also been sent to Gehlot, Government Chief Whip Mahesh Joshi and some other MLAs, but those close to Pilot insisted that it was meant to humiliate him.

Sunday's meeting at CM's official residence in the state capital was scheduled to take place at 9 pm, Congress sources said.

Independent MLAs supporting the Gehlot government have also been invited, in what is planned to be a show of strength for Gehlot.

The posturing comes amid allegations by Gehlot that the opposition BJP is trying to lure Congress MLAs to topple the state government.

The BJP has dismissed the claim, saying the developments only reflect a power struggle between Gehlot and Pilot, simmering since the Congress leadership in Delhi picked the more senior leader for the CM's post.

Senior Congress leader Kapil Sibal tweeted concern. Worried for our party. Will we wake up only after the horses have bolted from our stables?" he asked.

We have faith in the leadership of Chief Minister Ashok Gehlot and we have expressed this to him, Independent MLA Babulal Nagar told reporters.

Any person who crosses the party line will not be respected anywhere in the world. This is not the time to lose the respect earned over generations, Chandna said, without naming anyone.

In a tweet Sunday, Gehlot stressed that the police notices had gone to several people, including him. He did not name Pilot, but said that a section of the media had interpreted the notices wrongly.

He said as the investigation proceeds, others could also be issued notices.

Independent MLA Nagar said he is among the legislators issued with the notice.

The SOG has issued notice to me and has sought time. There are other MLAs who have received such notices, Nagar said.

Apart from the SOG inquiry, the state's Anti Corruption Bureau has also begun a probe into the alleged bid to bring down the government.

The Congress government has distanced itself from the three independent MLAs -- Khushveer Singh, Omprakash Hudla and Suresh Tak -- who were named in ACB's preliminary enquiry (PE).

Earlier, the government had the support of all 13 independent MLAs, who also voted for the Congress candidates in the Rajya Sabha elections last month.

The FIR is based on an alleged tapped phone conversation between two men, said to be BJP members, who were later arrested.