Rajasthan politics: A meeting was held on Monday at Rahul Gandhi's residence with Pilot that was also attended by Priyanka Gandhi. Following this meeting, Congress president Sonia Gandhi decided that the party will constitute a three-member committee to address the issues raised by Pilot and the aggrieved MLAs 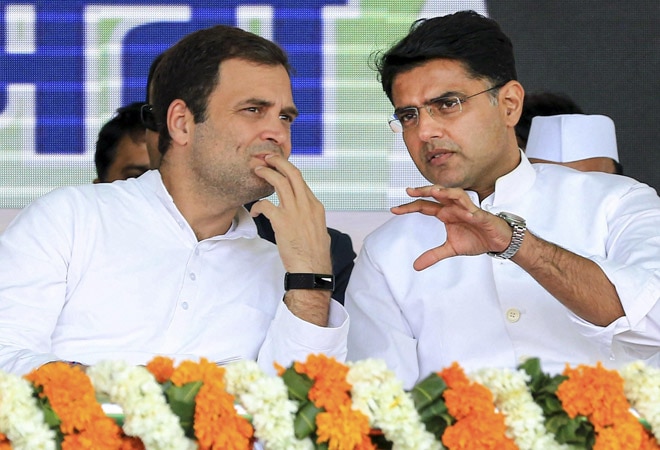 File photo: Congress leader Sachin Pilot (R) is seen with the then Congress President Rahul Gandhi during a rally in Jaipur.

Sachin Pilot, who engineered a rebellion against Ashok Gehlot government in Rajasthan with 18 more MLAs, has returned to the party fold. Pilot thanked Congress interim president Sonia Gandhi, Congress general secretary Priyanka Gandhi and former Congress chief Rahul Gandhi for addressing his grievances as well as of 18 other aggrieved MLAs.

A meeting was held on Monday at Rahul Gandhi's residence with Pilot that was also attended by Priyanka Gandhi. Following this meeting, Congress president Sonia Gandhi decided that the party will constitute a three-member committee to address the issues raised by Pilot and the aggrieved MLAs and arrive at an appropriate resolution.The Congress party also released a statement that said, "They had a frank, open, and conclusive discussion.

Pilot has committed to working in the interest of Congress and Congress government in Rajasthan".One possible agreement discussed during the meeting was favourable voting by Pilot and MLAs loyal to him in case of a trust vote during the upcoming Rajasthan assembly session.

Pilot, also struck a placatory tone. He said, "We raised issues of principles before the Congress leadership, and welcome their assurance of a time-bound redressal of our grievances".

The former Deputy CM of Rajasthan also added, "The party gives us post and can also take it back. I have no desire for any post but I wanted our self-respect to remain intact. I have contributed tot he party for 18-20 years now. We have always attempted to ensure the participation of people who worked".

Pilot said, "Some personal remarks have been made against me. I feel there is no place for personal mudslinging in politics", in an apparent reference to Gehlot's "nikamma" remarks against him.

The development marks a win for CM Gehlot who had reiterated that he has the number for the floor test and has been reluctant to accommodate Pilot.

The afternoon party meeting was followed by a discussion between Priyanka Gandhi, Congress MP Ahmed Patel, KC Venugopal and the rebel MLAs. The meeting discussed accommodation of dissidents in a cabinet reshuffle.

Meanwhile, rebel Congress MLAs started returning from Haryana to Jaipur. Bhanwarlal Sharma, one of the MLAs, met Gehlot, and said there are no camps in the Congress and the party stood united.

All India Congress Committee (AICC) said all rebel MLAs will return ahead of the August 14 assembly session, and asserted that the Gehlot government was safe.

Once all dissidents return, Congress will have a total strength of 107 MLAs in the 200-member state Assembly where the simple majority is 101. The Congress also has the support of a number of independent MLAs. BJP has 72 MLAs.

Congress leaders also claimed that with this rapprochement, "BJP's conspiracy" to break the party has been dashed and the Congress leadership has not yielded to demands of removal of Gehlot as chief minister.

The truce between Pilot, including 18 other MLAs and Gehlot government has ended the stalemate that triggered a prolonged crisis in the state. Pilot and 18 other MLAs have rebelled against the Ashok Gehlot-led Congress government in Rajasthan, leading to Pilot's sacking as deputy chief minister and state party chief.