"A stable government post-elections cannot be taken for granted...it would be dangerous for parties to postpone necessary legislations with the idea of passing the legislation post-election. Post-election politics may become even more challenging for whoever assumes power," said Reserve Bank of India Governor Raghuram Rajan. 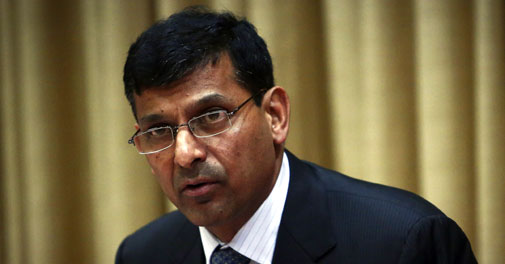 Reserve Bank of India Governor Raghuram Rajan on Wednesday exhorted political parties not to postpone passage of key economic bills because it may become challenging to get them approved after the 2014 general elections.

"A stable government post-elections cannot be taken for granted...it would be dangerous for parties to postpone necessary legislations with the idea of passing the legislation post-election. Post-election politics may become even more challenging for whoever assumes power," he said.

Rajan spoke at the Delhi Economic Conclave 2013 on 'The Agenda for the Next Five Years' in New Delhi.

Similarly, Rajan said delays in putting large, stalled projects back on track or an additional fiscal slippage would only amplify the challenges that the new government will face.

"It will benefit the economy if Parliament passes key bills and if current authorities take action to improve growth and fiscal health, including raising diesel prices to market level and eliminating other poorly targeted subsidies," the Governor said.

The RBI  governor said that in the absence of a stable government after the elections, due early next year, political parties would have to work together to meet the challenges facing the economy, otherwise the markets and rating agencies may not be kind to India.

"We are seeing some glimmerings of stronger growth. But it's too early to say we have certainly hit bottom. But I am hopeful that (growth) would be around 5 per cent."

The country's economic growth slowed to decade low of 5 per cent in the previous financial year.

On growth prospects, the RBI Governor said the agricultural sector has picked up following a good monsoon and India is likely to harvest a good crop. Several stalled projects have been cleared with the hope that investments will start in the second half of this financial year.

"So that's relatively good news on the growth front. I think growth is stabilising, though it's too early to call it bottomed out at this point," Rajan added.

He exuded confidence that the government would contain the fiscal deficit at the target of 4.8 per cent of GDP. On the current account deficit, Rajan said part of the reduction is on account of suppressed gold imports .

This was necessary in the short run but it is not desirable over the medium term. Similarly, not all measures to reduce the fiscal deficit are of the highest quality, Rajan said.

The Governor said the central bank would take more steps in the weeks ahead to increase liquidity in the government securities (G-secs) market.

He said India is much better prepared for the US Federal Reserve tapering its stimulus programme.

"We are much better prepared to deal with any possible tapering. We would not say we are complacent. There would be unexpected effects of tapering, but we are much better prepared. We have a stronger (forex) reserve position. We have shown we can raise money if needed. And our CAD is significantly lower this year. And finally, we are seeing some glimmerings of stronger growth," Rajan said.

A suggestion by the US Fed earlier this year on rolling back its monetary stimulus had hit the Indian markets as well as the currency hard. The rupee, which fell to a historic low of 68.85 against the dollar in August, has recovered since then and closed at 61.04 on Tuesday.

Rajan said the steadying rupee is evidence of stability in the economy as well as improved external conditions.

No CEO is perfect, every CEO has a blind side: Ram Charan