RBI Governor Raghuram Rajan will also likely reiterate his warning about the potential destabilising impact of outflows from emerging markets should the US Federal Reserve increase interest rates earlier than expected. 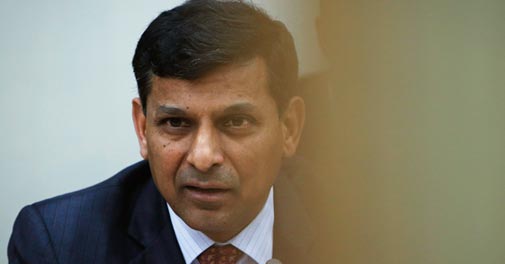 The Reserve Bank of India (RBI) is expected to keep interest rates steady while adopting tougher rhetoric on inflation at its policy review on Tuesday due to growing concerns that disappointing monsoon rains will lead to a surge in food prices.

RBI Governor Raghuram Rajan will also likely reiterate his warning about the potential destabilising impact of outflows from emerging markets should the US Federal Reserve increase interest rates earlier than expected.

The tone is likely to be less dovish than at the RBI last policy meeting back in June.

Back then, the RBI surprised markets by toning-down its anti-inflation rhetoric in what was widely seen as a goodwill gesture to Prime Minister Narendra Modi, whose landslide election victory in May was built on voters' hopes that he would put momentum back in India's economic growth.

Instead, the RBI could reiterate a commitment to helping spur lending - a priority for the Modi government - by providing more funding in money markets or by further lowering lenders' mandatory minimum bond holdings, known as the statutory liquidity ratio (SLR).

The RBI had unexpectedly cut the SLR in June by a half a per centage point.

"I expect the tone to be less dovish than the June policy as food prices are already putting upward pressure on inflation," said A. Prasanna, economist at ICICI Securities Primary Dealership in Mumbai.

"The next reading on inflation could be significantly higher than the previous reading. However the RBI may take some comfort from core CPI inflation easing and the incipient recovery in industrial production."

Nearly all 43 economists surveyed in a Reuters poll published last week expect the RBI to leave its repo rate on hold at 8 per cent after last raising it by a quarter per centage point in January.

Analysts do not expect any changes in policy this year despite efforts by the Modi government to keep food prices in check and economic growth recovering slightly.

Policymakers have taken steps to contain food prices by curbing hoarding of food articles and setting limits on export of onions and potatoes, which are staples in Indian cooking.

Instead, the biggest concern remains below average rainfalls that are believed to be pushing up vegetable and fruit prices by double digits, making the outlook for inflation unpredictable.

Vegetable prices rose 9 per cent while fruit prices rose nearly 21 per cent year on year in June, when monsoon was 48 per cent below average, although rainfall improved in July, the second month of the monsoon season.

Analysts say inflation is likely to accelerate as a result, and then there is the additional risk the Middle East tensions could push crude oil import prices.

In June, the inflation rate was the lowest since government started publishing the figures in January 2012, with the consumer price index showing a 7.31 per cent rise from a year earlier.

An upsurge in inflation would kill any market hopes for interest rate cuts to spur an economy that has shown signs of a slight recovery in growth. Industrial production and manufacturing activity data have raised hopes that the economy could move above the sub-5 per cent growth rate seen in the previous two years.

Meanwhile, at home the RBI will want to keep a close eye on the government's ambitious efforts to reduce the fiscal deficit to 4.1 per cent of gross domestic product.

"The central bank is likely to acknowledge positive fiscal developments and softer inflation, but with an eye on potential risks to the price trajectory," wrote Radhika Rao, economist at DBS Bank in a note on Monday.