The central bank also said the loan-to-value ratio for loans against jewellery will be 60 per cent and asked NBFCs to insist on a copy of the PAN Card of the borrower for all transaction above Rs 5 lakh. 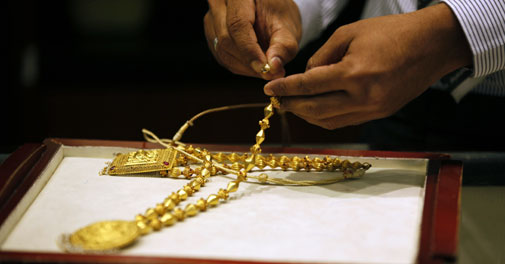 The Reserve Bank of India (RBI) has tightened norms for loans against pledge of gold jewellery, in a bid to keep demand for the yellow metal under check.

Currently, there is no standard method for arriving at the value of gold accepted as collateral and valuation is arbitrary and opaque.

"In order to standardise the valuation and make it more transparent to the borrower, it has been decided that gold jewellery accepted as collateral will have to be valued at the average of the closing price of 22 carat gold for the preceding 30 days as quoted by the Bombay Bullion Association (BBA)," RBI said in a notification.

While accepting the gold as collateral, the non-banking finance company (NBFC) should give in writing to the borrower, on their letter head giving the purity (in terms of carats) and weight of gold, the central bank said.

If the gold is of purity less than 22 carats, the NBFC should translate the collateral into 22 carat and state the exact grams of the collateral. In other words, jewellery of lower purity of gold shall be valued proportionately.

RBI also said the loan-to-value ratio for loans against jewellery will be 60 per cent.

It further said, NBFCs financing against the collateral of gold must insist on a copy of the PAN Card of the borrower for all transaction above Rs 5 lakh. High value loans of Rs 1 lakh and above must only be disbursed by cheque.

The central bank prohibited such NBFCs from issuing misleading advertisements like claiming the availability of loans in a matter of 2-3 minutes.

Noting that unbridled growth may not be in the overall interests, RBI has also tightened rules for opening branches by such NBFCs. "NBFCs which already have more than 1000 branches may approach the RBI for prior approval for any further branch expansion," it said.

With regard to auction, it said, it should be conducted in the same town or taluka in which the branch that has extended the loan is located.

While auctioning the gold, the NBFC should declare a reserve price for the pledged ornaments, it said, adding, this should not be less than 85 per cent of the previous 30 day average closing price of 22 carat gold as declared by BBA.