The low productive agriculture continues to provide maximum employment and the high-skill services maximum income, while the manufacturing sector remains relatively insignificant in either Relying on private investment alone may not take India out of its current predicament.

While the debate in the official circles is very much on whether India's current economic slowdown is structural or cyclical in nature, the larger issue of the structural transformation needed to push the economy into a double-digit growth trajectory - a hot topic until some years ago - has been forgotten.

At the beginning of the current NDA regime, the government's economic policy document - the Economic Survey of 2014-15 - laid out a clear road map for this. It proposed a Lewisian structural change, advocating a strong push for the 'Make in India' (manufacturing) programme to absorb surplus and unskilled labour stuck in low productive agriculture and the 'Skilling India' programme to provide adequate skilled labour for high productive and potentially high growth manufacturing and services sectors.

With both the flagship programmes faltering and long forgotten, the structural transformation has, apparently, little traction now. The first Economic Survey (2018-19) in the second term of the current regime instead identified "investment, especially private investment" as the "key driver" of demand, productivity, employment etc. There was no mention of double-digit growth.

The recent policy responses to revive the economy - cut in corporate tax, bank recapitalisation, writing off NPAs, withdrawal of enhanced tax on FPIs and the super-rich with a taxable income of Rs 2 crore or more etc. - are apparently a part of this new thinking of boosting private investment.

However, it would be worthwhile to take a fresh look at the direction the three key sectors of the economy - agriculture, manufacturing (actually a sub-sector of industry) and services - have taken in their growth and contribution to two big concerns of the day - income and employment - since 1950-51 from which economic statistics are available to get a sense of their relative significance.

For most of the post-independent period, it is the services sector which has led the field in generating income - measured by its contribution to the growth in GDP.

The RBI data (2004-05 base, constant prices) reveals that in 1950-51 when India was primarily an agriculture economy and most of its income came from agriculture (52% of the GDP), the services sector contributed 35% to the national income. The manufacturing was a poor third at 9% (industry's contribution was 11%). It was only in post-1980-81 that the share of agriculture started falling rapidly and that of the services zoomed.

Under the new series (2011-12 base, constant prices), the situation remains unchanged. 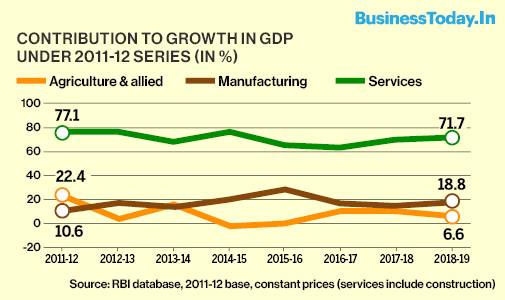 This is despite the fact that the 2011-12 series made dramatic changes, increasing the manufacturing (and also industry's) contributions and decreasing that of the services.

A comparative analysis of data under the two series - between 2004-05 and 2013-14 for which relevant data is available - would bear this out.

The situation was not very different for most other years. 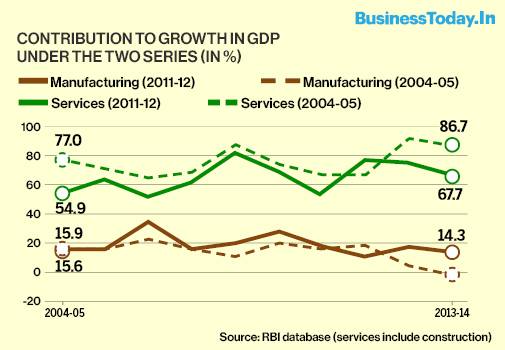 Agriculture remains the backbone of employment

The significance of employment notwithstanding, no government agency maintains a time series of data on it. The erstwhile Planning Commission of India provided comparative data for some years while the ILO provides such information since 2000 (financial year). The Economic and Political Weekly's issue of December 3, 1966, provided an estimate for 1950-51, 1955-56 and 1959-60 using the Central Statistical Organisation's data. 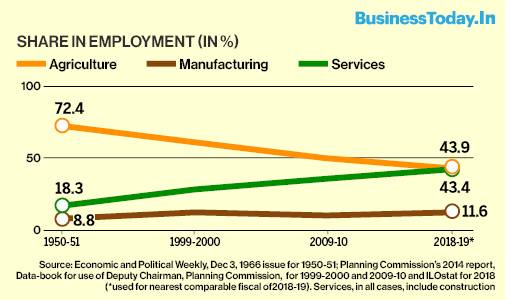 With the manufacturing is increasingly getting more capital intensive with automation (artificial intelligence and other technological advances) threatening more jobs, its ability to create significant employment in future is suspect.

There is no significant trend in the growth of respective GDPs, except that the services sector has maintained its momentum since 1951-52, unlike the other two. The last few fiscals reflect a definitive slowdown in the economy. The new series changed calculations and adopted gross value addition (GVA). The correlation between GVA and GDP is: GDP is equal to GVA plus tax and minus subsidy. 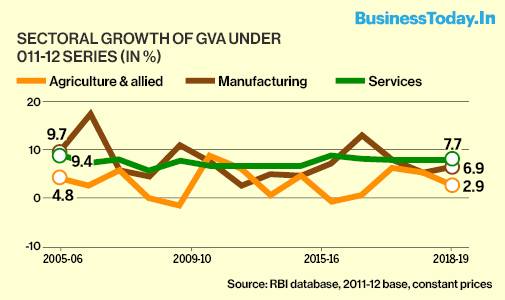 Need for beginning from the beginning: Agriculture

The Economic Survey of 2014-15 saw merit in (a) the Lewisian shift from agriculture to manufacturing - as the developed countries and several Asian giants had demonstrated - as well as to (b) the services sector as the experience of India and some African economies showed it to be capable of driving high growth.

When it comes to the Asian giants, a study by the Asian Development Bank (ADB), Agriculture and Structural Transformation in Developing Asia: Review and Outlook, provides more nuance to their story, saying that their high growth was actually propelled by agriculture, which led to a rapid expansion of the manufacturing sector.

It says: "The newly industrialised economies in East Asia (Japan, South Korea and Taipei, China), followed an agriculture development-led industrialisation pathway. The fast-growing transition economies (China and Vietnam) seem to be traversing a similar one. Agricultural growth has also been a prominent feature in the rest of developing Asia, particularly Indonesia, Malaysia and Thailand. However, growth in agriculture has lagged in Bangladesh, India, Pakistan, and the Philippines; in these countries, the period of rapid sustainable growth came late or has yet to materialise"

In sharp contrast, growth in India and several African economies (like Tanzania, Ethiopia) has been led by the services sector even when their manufacturing sector is not growing. This was because, a study on the African experience, Can Service Be a Growth Escalator in Low Income Countries? - the Economic Survey of 2014-14 relied on to bat for simultaneous attention to services - notes that this is because services produced and traded across the world have expanded with advances in technology and globalisation. Based on their comparative advantages, it is now possible for low-income countries to grow faster, just as the case with manufacturing.

Nevertheless, both experiences point to a common start: agriculture. That is because agriculture is the main source of income for the bottom half of the population in low-income countries.