Realpolitik in the land of geeks

Business in Bengaluru has much at stake in the state elections for despite its revenues and branding, India's Silicon Valley is far from a happy land. 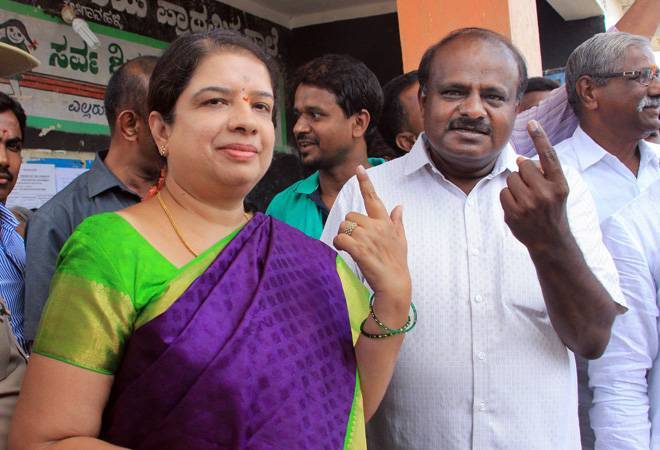 Business in Bengaluru has much at stake in the state elections for despite its revenues and branding, India's Silicon Valley is far from a happy land.

Those who know Azim Premji, India's richest IT czar, recall readily how he eschews stepping out of his home on the Wipro campus and face the Bengaluru traffic gridlocks. Today, he is not alone. Most office goers feel the same and companies are more than willing to accommodate and redistribute staff across various offices in the city to enable them to try and cut down commuting time and operate from as close to office as possible. But then, congested roads is only one of the problems. Bengalurians lament how the city is not clean anymore and seriously needs work on waste management.

Water crisis is looming large with enough stories and studies on the internet, including a recent BBC report on how the city is heading for a severe water shortage. But then, it is election time and realpolitik has occupied centrestage with caste and religion gaining currency in the political discourse. Corporates are muted in their responses to what has been achieved and what is missed out. But all are agreed that whoever comes to power, it matters for Bengaluru - still the undisputed Silicon Valley of India.

The views of the city's geeks and knowledge workers is that their voting preferences may not be a reflection of how Karnataka as a state votes. The 11 million population still commands less than 12 per cent of the total electoral votes. Out of the 227 constituencies, it represent only 27 and geographically, only 0.4 per cent. But it is where the money is - the state's tax revenues, it is invariably among the top metro cities in the country in terms of contribution to direct tax collections. It is the state's symbol of business and financial growth, its complete software exporter and the showcase of future potential. After all, it is where the corporates, who subscribe to the electoral funding through bonds to donate directly to the political party, are all headquartered. Therefore, what happens at the hustings matters. Will more money go into start ups and seasoned businesses, the electoral outcome and the signs on policy stability will determine. This is important at a time where other states in India are pushing their IT and biotech agenda - be in the neighbouring Hyderabad or any of the other IT hubs - Delhi NCR, Chennai or Pune.

Whoever comes to power, corporate head honchos from the city, most talking without wanting to be identified, say, Bengaluru needs to urgently deal with waste management, complete all the infrastructure projects, specially the metro rail lines, in a time-bound fashion; speed up work on the most controversial and delayed Bellandur lake restoration, which is huge and is becoming a symbol of the desire to restore  several lakes of the city. Apart from these, off course, there is hope that whoever comes to power, will not "keep escalating the power tariffs" and will "focus on water conservation and supply" . India Inc in Bengaluru hopes  technocrats with domain knowledge will be made ministers. "Much of what happens on these fronts will ensure whether the city where private enterprise is thriving becomes the humming Hong Kong of India," says a leading corporate.

"For how long can Bengaluru remain a city of teflon-coated campuses, meaning self-contained and removed  from the world outside. Beautiful houses and office edifices with poor approach roads and with uncleared garbage will, overtime, make attracting talent, a challenge," says a senior executive of a leading company.

Others point to concerns on healthcare, even though the city has over 20 government hospitals of various sizes with high occupancy but suboptimal in terms of efficiently performing medical procedures. This is despite a plethora of health schemes and the state having over 40 medical colleges. But instead, maternal mortality in the state at 133 per 100,000 live births is higher than say Maharashra, a state four times bigger, at 68.

Others feel, the city has its own growth momentum. "Bengaluru has always been a centre for technology and innovation for many years , much before the IT companies and internet (e-commerce) companies came to the fore," says BJP member of parliament Rajeev Chandrasekhar. He is referring to HAL, ISRO, Bharat Electronics. The city has a large population of technologically-savvy people, early stage investors that are based here. This, he says, is a readymade ecosystem with people with the ideas and people with the capital like in the Silicon Valley in the US."

Ask him about Bengaluru and the start ups that the state is taking credit for and he says, "One major trend impacting start-ups is that the normal sources of capital, which were western funds or US-based funds, which played a dominant role in fuelling the last five to seven years for start ups, has been replaced by a significant amount of Chinese capital - the likes of the Alibabas have stepped in the vaccum caused by the refocusing of the Western funds." So what is the concern? "Chinese capital in the internet is always a cause for concern especially when we are talking about growing awareness on privacy. It is something public policy makers have to careful about," he says. He also sees a clear need for "a proactive and strategic vision to move investments and attract people to cities like Mangaluru, Belgaum, Mysuru, Hubli-Dharwad that can all become good economic engines." They need better connectivity with Bengaluru, not just by road but also through other means such as air and rail, he says.

Gaurav Gupta, the state principal secretary for IT, BT and science and technology secretary, last month in April, talked of the immense progress made, especially for assisting the start ups. "Five years back, we were the first to start an incubator," he says. Now, partnering with different organizations, there are incubators, there is funding of early stage seed funding for start ups, venture funds - such as Karnataka IT venture capital. Apart from some unique initiatives that the government has encouraged such as the grand challenges - innovative solutions with high social impact like in water conservation, better extension of health services and others (all started about two years ago). Then, he says, the state has also looked at new technologies - opened centres of excellence in select areas in partnerships with various entities such as Nasscom; IIIT, Bangalore; IISc; C-CAMP (Centre for Cellular and Molecular Platforms) and others in areas such as for IoT; AI and  data sciences; animation and visual effects; Machine learning and robotics; cyber security and for agri innovation. All of these over the past 18 months. That apart , also looked at applications of new technology and gives the example of the white paper put out a couple of months ago on the roadmap for effective use of blockchain in various fields of governance recently.  Then, there is vision group on nanotechnology, there is an electric vehicle policy in place and also in the works now are things like an incubation system dedicated for electric vehicles.

Most see the current government starting Bengaluru's development only in the last two years but do feel, all projects where work has been initiated need to be pursued to completion. Change of government, in case that happens, they hope should not mean reversal of policies for the sake of change. For instance, some of them like the start up policy or the electric vehicle policy are seen as positive moves. Irrespective of the political party, Kiran Mazumdar-Shaw, Chairperson and Managing Director of Biocon, sums up what the industry in Bengaluru is hoping for:  "What we as industry want is only stability and predictability in policy so that industry can plan better. That is only in the best interest of the state and its capital." The extent to which this can happen will depend on the political configurations that emerge on May 15 and what follows thereafter.

Karnataka election results 2018: Will kingmaker be the king? BJP says will prove majority in house