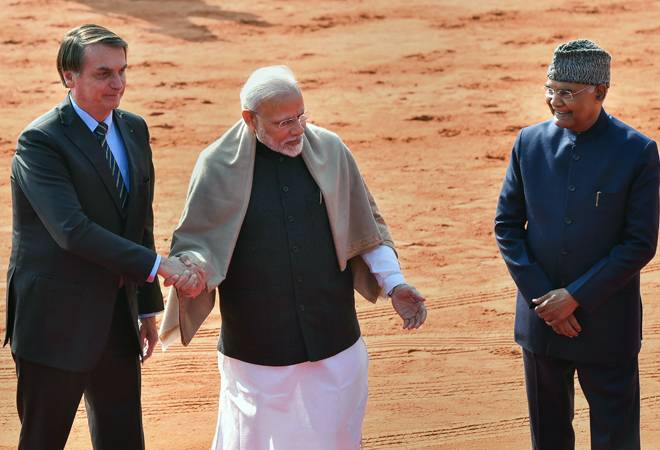 Brazilian President Bolsonaro is the Chief Guest at Republic Day 2020

India and Brazil on Saturday inked 15 agreements to boost cooperation in a wide range of areas like trade and investment, oil and gas, cyber security and information technology after talks between Brazilian President Jair Messias Bolsonaro and Prime Minister Narendra Modi. Modi said an action plan has been finalised to further expand strategic ties between the two strategic partners.

"Your visit to India has opened a new chapter in bilateral ties between India and Brazil," PM Modi said in his media statement in presence of Bolsonaro. Calling Brazil a valuable partner in India's economic growth, the Prime Minister also said both the countries are together on various global issues despite geographical distance.

On his part, Bolsonaro said the two countries have further consolidated already strong ties by signing 15 agreements providing for cooperation in a range of areas.

🇮🇳-🇧🇷|Geographically poles apart but still on the same page.

PM @narendramodi had a productive discussion with Prez @jairbolsonaro on leveraging the strategic commonalities shared by two countries to intensify cooperation at bilateral, multilateral levels across different areas pic.twitter.com/kGu3n3hX9X

After the meeting, Jaishankar, in a tweet, said Bolsonaro's visit will open "new opportunities" for bilateral cooperation. The Brazilian president was given a ceremonial welcome at the Rashtrapati Bhavan in presence of President Ram Nath Kovind and Modi.

This is the first visit of President Bolsonaro to India. Bolsonaro, a former army captain, won a landslide victory in Brazil's presidential election in October 2018 and took the reins of the country in January last year.

India's ties with Brazil, the largest country in Latin America, have been on an upswing in the last few years. The country has a population of 210 million with $1.8 trillion economy.

Brazilian investments in India are mainly in automobiles, IT, mining, energy and biofuel sectors. India has invested in Brazil's IT, pharmaceutical, energy, agri-business, mining and engineering sectors.