The stakeholders raised the concern during an interaction here with Tourism Department Secretary Rigzian Sampheal, who assured them that steps would be taken to address the issue. 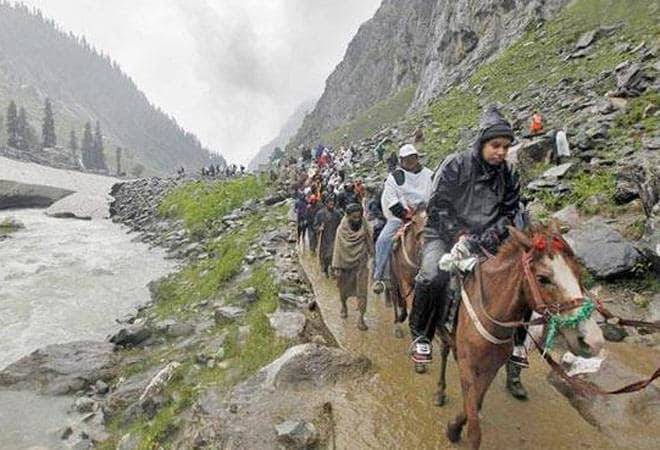 The restriction on movement of civilian vehicles on Amarnath Yatra routes are hampering tourism in Kashmir Valley during the peak season, people with stakes in the industry said Sunday.

The stakeholders raised the concern during an interaction here with Tourism Department Secretary Rigzian Sampheal, who assured them that steps would be taken to address the issue.

Authorities in Jammu and Kashmir have barred civilian traffic on Qazigund-Nashri stretch of the Srinagar-Jammu national highway for five-and-a-half hours from 10 am to 3:30 pm in order to allow incident-free passage to vehicles carrying Amarnath pilgrims.

No vehicle movement, except for emergency vehicles, is allowed in the same or the opposite direction as the yatra convoy on the stretch and non-yatra vehicles are allowed to use the stretch only after the convoy is cleared.

"Tourists are being harassed in the name of security for the yatra. Tourists are not allowed to move freely towards Sonamarg or Pahalgam. The restriction on the highway also impacts their (tourists') movement," Kashmir Hotel and Restaurant Owners Federation president Wahid Malik said during the interaction also attended by the Tourism Kashmir director.

Nazir Mir, chief patron of Association of Kashmir Tour Operators, said the restriction were affecting leisure tourism and it has a negative impact on the people intending to visit the valley.

The stakeholders said the valley has witnessed almost zero bookings since the 45-day yatra began on July 1, and sought a solution to the issue.

Another tourism player, Ishfaq Siddiq, who is the chairman of Travel Agents Association of Kashmir, said the government should put a blanket ban on tourism for the yatra period if it cannot address such issues.

"There seems to be trust deficit as far as government agencies are concerned. The leisure tourism has been adversely hit. If there are no solutions, then the government should put a blanket ban on tourism for these 45 days (of the yatra)," he said.

Some stakeholders also suggested deployment of tourist police at various security check-points to identify leisure tourists and help them.

The tourism department secretary assured them that steps would be taken for the smooth traffic management.

"The main feedback from the tourism stakeholders was about traffic management issues as the yatra has started. I have assured them we will resolve that as we have the mechanism for that," Sampheal told reporters.

He said the traffic for Amarnath Yatra is a very well organised traffic management system and the administration has kept a balance between pilgrimage tourists and leisure tourists so that they do not face difficulties.

"The yatra is a process and not an event. There is a need for mid-course correction everywhere and we will ensure that the traffic flows smoothly based on the feedback that we get," he said.

About high airfare to and fro Kashmir in the peak season, the secretary said the department will take up the issue with the airlines and expressed hope the airfare would be rationalised.