A firm trend in the domestic equiy market, fresh capital inflows and some weakness in dollar overseas restricted the fall in the rupee to some extent, a forex dealer said. 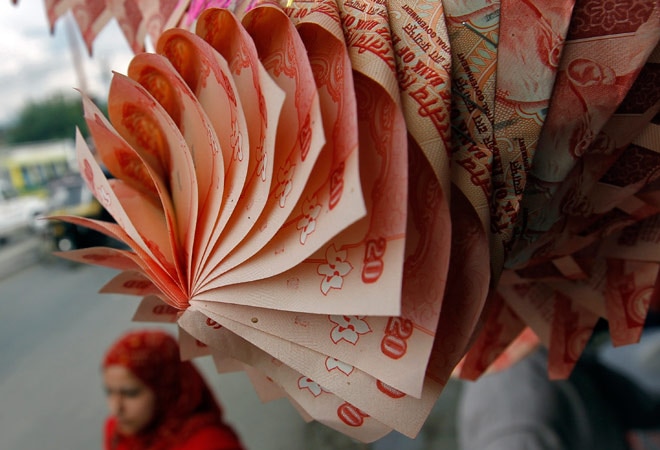 The rupee on Monday, extending losses for the fourth straight session, fell by ten paise to an over 13-month closing low of 63.67 against the Greenback following sustained demand for the US dollar from importers.

At the Interbank Foreign Exchange (Forex) market, the domestic unit commenced lower at 63.66 a dollar from last Friday's close of 63.57.

A firm trend in the domestic equiy market, fresh capital inflows and some weakness in dollar overseas restricted the fall in the rupee to some extent, a forex dealer said.

Pramit Brahmbhatt, Veracity Group CEO said, "Indian rupee started the last week of the year on weaker note and depreciated by ten paise for the day, due to dollar demand from oil companies which dented the Rupee movement... Local equities closed on a positive note which capped the rupee losses. The trading range for the spot rupee is expected to be within 63.20 to 64.00."

Meanwhile, the benchmark Bombay Stock Exchange (BSE) index Sensex surged by 154 points (or 0.57 per cent) on Monday. Foreign portfolio investors (FPIs) had bought shares worth US $65.87 million on Friday, as per data released by capital market regulator Securities and Exchange Board of India (Sebi).

In the global market, the dollar index was down by 0.05 per cent against a basket of six major global rivals.

Against other overseas currencies, the rupee recovered modestly to 98.92 against the pound from 98.93 but moved down further against the euro from 77.48 to 77.59.

Govt to tackle black money with greater focus in 2015: FM