The sharp drop in WPI inflation, which fell for the fourth month in a row, comes just at the back of retail inflation declining to a record low of 6.46 per cent in September. 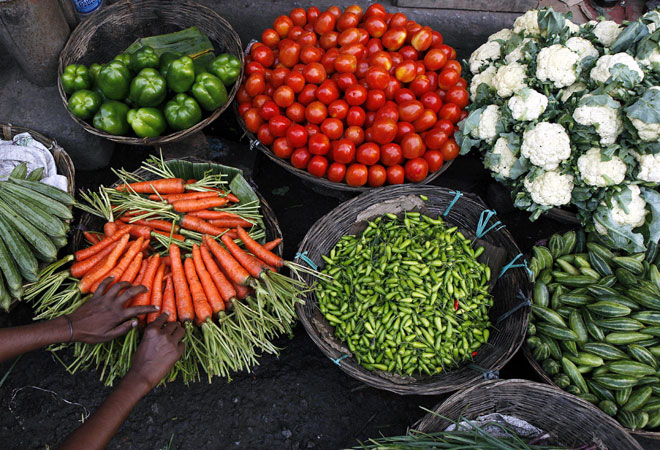 Softening food prices pulled down the wholesale price inflation to near five-year low of 2.38 per cent, creating headroom for the Reserve Bank to cut interest rate to boost demand and push industrial growth.

As per data released by the government on Tuesday, food inflation fell to a nearly 33-month low of 3.52 per cent.

The continuing decline in food inflation comes as a big relief to the common man as well as the policy planners in the government.

The sharp drop in WPI inflation , which fell for the fourth month in a row, comes just at the back of retail inflation declining to a record low of 6.46 per cent in September.

Wholesale inflation in onion contracted to 58.12 per cent in September as compared to a contraction of 44.7 per cent in the previous month.

While inflation in vegetable basket as a whole shrunk to 14.98 per cent in September, rate of price rise in potato was at 90.23 per cent from 61.61 per cent in the previous month.

Commenting on the data, industry body CII said going forward, the downslide in global commodity prices led by fuel together with other factors should help contain inflation.

"This would provide space to the RBI to review its cautious stance on interest rates," CII said.

FICCI said the decline in inflation is getting broad based and indicates inflationary pressures waning as of now.

"...the prices are expected to remain moderate. CPI inflation is moving in consonance with RBI's target rate and this should bring in some breathing space," the chamber said.

The RBI, which maintained status quo in interest rate since January, will come out monetary policy review on December 2.

Diesel and petrol prices are likely to come down in the wake of sliding global crude prices which is expected to further ease inflationary pressure.

The Reserve Bank primarily factors in Consumer Price Index (CPI) inflation while framing monetary policy. It is targeting 8 per cent retail inflation by January 2015 and 6 per cent by January 2016.

The data further revealed that inflation in milk, eggs, meat and fish continued to decline in September as well.

However, there was slight increase in the prices of fruits during the period.

Inflation in manufactured products, like sugar, edible oils, beverages and cement also fell, declining to 2.84 per cent in September as against 3.45 per cent in the previous month.

Another industry chamber PHDCCI said it expects a softening policy stance from RBI in the coming times.

"We believe a cut in repo rate would be inevitable to revive the industrial growth and demand to pick up pace.

Revival of demand scenario would pave the way for revival of investment sentiment," it said.

The WPI inflation in the fuel and power segment, which includes LPG, petrol and diesel, declined to 1.33 per cent as compared to price rise of 4.54 per cent in August.

Meanwhile, wholesale inflation based on final index for July has been revised upwards to 5.41 per cent from the provisional estimate of 5.19 per cent.

The build up inflation rate in the financial year till September was at 2.61 per cent compared to a build up rate of 6.23 per cent in the same period of 2013-14.

Central banks will not be able to avert next global crash