On the day of verdict, Thackeray hardened the Sena's stand by reminding the BJP of the 50:50 formula "agreed upon" between Amit Shah, himself and Fadnavis ahead of the 2019 Lok Sabha polls. 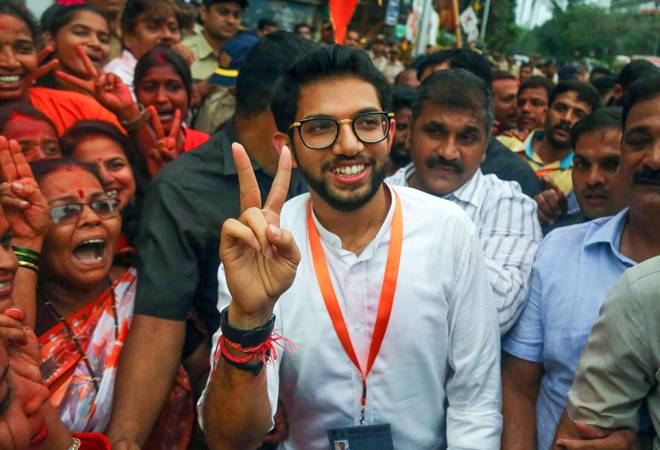 Shiv Sena chief Uddhav Thackeray on Saturday demanded a written assurance from its ally BJP for implementing "equal formula for sharing of power" before holding talks on staking the claim to form the next alliance government in Maharashtra, a party MLA said. Newly-elected MLAs of the Sena, who met Thackeray at his residence in Mumbai, demanded that his son Aaditya Thackeray be made the chief minister in the next government.

Thackeray also said he had "other options open" but is not interested in exploring them since the BJP and the Sena are bound by the "Hindutva ideology", the MLA told PTI. The MLAs met Thackeray two days after the party won 56 seats in the October 21 elections. They have authorised the Sena chief to take all decisions regarding formation of the next government, he said. The move to demand written assurance is viewed as a pressure tactic by the Sena in view of the under-whelming performance of the BJP which won 105 seats, a loss of 17 seats compared to its 2014 tally.

According to political observers, the subdued performance of the BJP has increased the bargaining power of the Sena whose tally too came down to 56 seats from the 63 in 2014. "The Shiv Sena contested less number of seats in the Lok Sabha and Assembly polls. Uddhav Thackeray has said the BJP should give a written assurance about implementing the power-sharing formula arrived at in the presence of Amit Shah and Chief Minister Devendra Fadnavis at my residence about equal sharing of seats and power," Sena MLA Pratap Sarnaik quoted Thackeray as saying after the meeting.

Shah had met Thackeray at the latter's residence to seal the alliance for the Lok Sabha elections held in April-May. The MLA further said that discussions on formation of the next government can take place after the BJP produces such assurance. "The Sena chief told us that he had other options open (apparently to form government) but he was not interested. He told us that the BJP and the Sena are bound together by the Hindutva ideology," said Sarnaik.

He said leader of the Sena legislature party will be selected after new MLAs take oath. The speculation about an "interesting possibility" started doing rounds on the day of the poll verdict when former chief ministers Ashok Chavan and Prithivraj Chavan of the Congress said the party should consider all options to keep the BJP out of power.

Meanwhile, Union Minister and senior BJP leader Raosaheb Danve told reporters that his party was not aware about any equal power sharing deal being proposed by the Sena. "After Diwali, CM Devendra Fadnavis will discuss the issue of formation of government with Uddhavji," he said.

In the elections, the BJP won 105 seats and the Sena 56 while the NCP and the Congress bagged 54 and 44 seats, respectively in the 288-member House. The verdict came as a shocker for the BJP which had set itself a higher target to secure the absolute majority on its own. The changed scenario has emboldened the Sena which knows well that it is in a position to call shots and endorse Aaditya as the CM face.

Aaditya, 29, became the first Thackeray since the party was founded in 1960s to enter the poll fray and win. He won from Worli seat in Mumbai, a Sena pocketborough. On the day of verdict, Thackeray hardened the Sena's stand by reminding the BJP of the 50:50 formula "agreed upon" between Amit Shah, himself and Fadnavis ahead of the 2019 Lok Sabha polls.

"I contested less number of seats for Lok Sabha and assembly elections. I cannot accommodate the BJP everytime. I want to remind the BJP the formula which was worked out in the presence of Amit Shah," Thackeray had said.

According to sources, the formula entails rotational chief ministership between the Sena and the BJP and the equal sharing of Cabinet berths. A speculation proposing the NCP supporting the Sena to install its CM and the Congress backing the government from outside has been doing rounds. However, NCP chief Sharad Pawar had ruled out any such possibility to back the Sena. Thackeray too had said the popular mandate to rule was given to the BJP and his party.

State Congress president Balasaheb Thorat though ruled out any truck with the Sena, he had cryptically said that if the Sena comes with a proposal the Congress will seek advice of its high-command.

The Sena has been rooting for Aaditya either as the next CM or deputy chief minister of the state. However, Prime Minister Narendra Modi and Shah, who also holds the BJP chief's post, have repeatedly said that Fadnavis will continue to be at the helm.