Smriti Irani is Women and Child Development Minister: 7 things you need to know

Modi's new cabinet: Smriti Irani was part of the older Modi government too, and has retained Ministry of Textiles from her earlier stint. 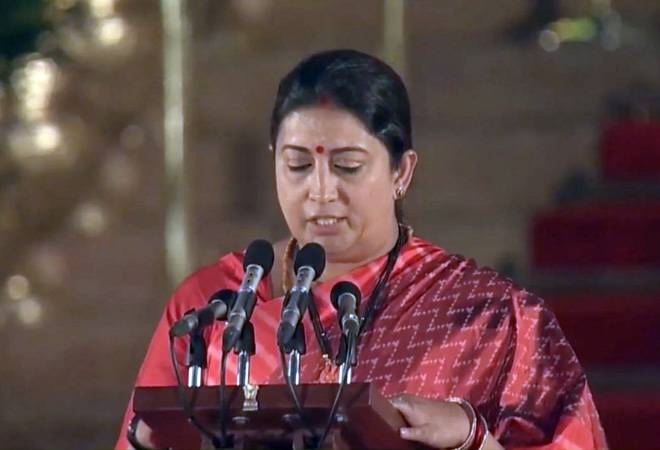 Smriti Irani became a household name in India years before she entered politics. After a successful career as a TV actress, Irani has finally achieved electoral success, and a grand one at that. She defeated Rahul Gandhi in the Congress bastion of Amethi to reach Lok Sabha for the first time.

Irani was part of the older Modi government too, and has retained Ministry of Textiles from her earlier stint. This time around, she has been given the crucial Ministry of Women and Child Development too.

Here are the things you need to know about Smriti Irani:

1. Smriti Irani has a culturally diverse background. She was born to Shibani Bagchi, a Bengali, and Ajay Kumar Malhotra, a Punjabi-Maharashtrian.

2. Irani has been close to Rashtriya Swayamsevak Sangh (RSS), as her grandfather was an RSS worker. Her mother, Shibani Bagchi was a member of the Jana Sangh, the political arm of RSS which later developed into the Bharatiya Janata Party of today. Irani herself joined RSS during her childhood days.

3. Irani completed her schooling from Holy Child Auxilium School in New Delhi. She then enrolled for a three-year-long Bachelor of Commerce course at Delhi University's School of Open Learning in 1994. She did not complete it though, and left the program in the first year itself.

4. In the early days of her career, Irani tried her luck in modelling. She participated in the Miss India contest in 1998, but couldn't win it.

5. After modelling, Smriti started acting in TV series in 2000. Her debut was in Aatish and Hum Hai Kal Aaj Aur Kal, both of which were aired on Star Plus. The biggest milestone in Irani's acting career was Ekta Kapoor-produced Kyunki Saas Bhi kabhi Bahu Thi. She continued to appear on-screen in various TV serials and films till early 2010s.

6. Irani joined the Bharatiya Janata Party in 2003 and was named the head of Maharashtra Youth Wing in 2004. She unsuccessfully contested the 2004 General Elections against Congress' Kapil Sibal from the Chandni Chowk seat. By the end of the year, Irani blamed Narendra Modi, who was the Chief Minister of Gujarat at that time, for the loss in 2004 Lok Sabha elections and threatened to fast unto death until he resigned. She changed her mind after the BJP leadership threatened to take action against her.

7. Irani married businessman Zubin Irani in 2001. The couple has a son Zohr and daughter Zoish. Irani is a stepmother to Shanelle, Zubin's daughter his previous marriage.