They also said that China is increasingly getting isolated internationally for its aggressive military posturing in Ladakh, South China Sea and the Indo-Pacific region, and time has come for India to take advantage of the situation 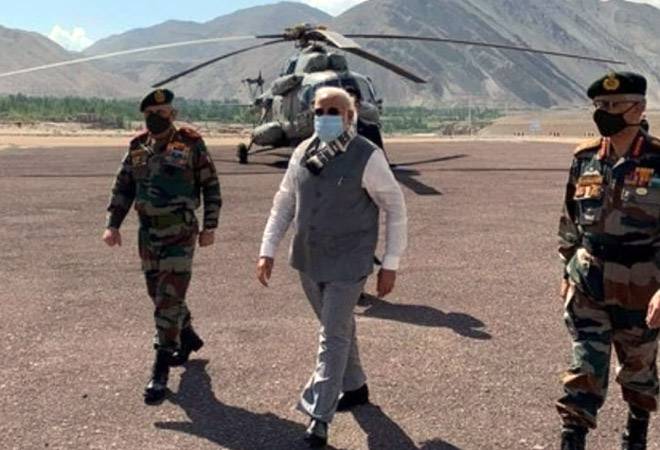 By visiting Ladakh, Prime Minister Narendra Modi has sent a very clear signal that India is ready to escalate the cost on China for its "misadventurism" and that the armed forces are adopting a firm approach in defending the country's territories, strategic affairs experts said on Saturday.

They also said that China is increasingly getting isolated internationally for its aggressive military posturing in Ladakh, South China Sea and the Indo-Pacific region, and time has come for India to take advantage of the situation.

Hailing Modi's visit to Ladakh, former Deputy Chief of Army Staff Lt Gen (retd) Subrata Saha said the "loudest message" from the visit was that India is not going to back-off in eastern Ladakh and that it will handle the situation with a "firm hand".

He also talked about Modi paying glowing tributes to 20 Indian soldiers killed in the Galwan Valley clashes and sought to contrast it with China's refusal to even acknowledge its military casualties.

"On the Indian side, we have the prime minister going there, literally close to the ground zero, and praise the valiant sacrifice of 20 bravehearts at Galwan and just compare it to the Chinese side. They have not even acknowledged their casualties. Imagine the impact it could have on the minds of a Chinese soldier," Saha said.

Strategic affairs expert Dr Laxman Behera said by visiting Ladakh, Modi sent a very clear message to China that India is "resolute and firm" in defending its borders and that it is ready to escalate the cost on China for its "misadventurism".

"The prime minister sent a very clear and unequivocal message to China at a time India is getting lot of international support on the border row. China is being marginalised. Major powers have supported India on the issue," he said.

"This message from the visit was that we are taking these intrusions very seriously, unlike previous episodes of border skirmishes in Depsang in 2013, Doklam in 2017 and Chumar in 2013. The message was that the latest actions are highly provocative and we will respond adequately," he said.

Behera, a noted defence expert from Manohar Parrikar Institute for Defence Studies and Analyses, said China will incur significant economic losses because of its latest belligerence in eastern Ladakh, South China Sea as well as in the Indo-Pacifc region after drawing criticism over origin of the COVID-19.

"China is being slowly and steadily marginalised in the international community. India should take advantage of it. We should try to sideline China economically in various global fora. That should be the focus of Indian foreign policy," he said.

Saha, a member of the National Security Advisory Board, called the prime minister's interaction with the soldiers at a high-altitude forward location "absolutely fascinating and very motivating" from a military point of view.

"He spoke about two mothers that he respects. 'One is mother India and the other is the mother who gives birth to valiant soldiers like you'. Line like this is very big for people who are listening to him," he said.

The former Deputy Chief of Army Staff also called Modi's message from Ladakh to the rest of the country to work for making India a self-reliant nation.

"Standing there, he was telling everybody, that let us become a self reliant country. He was literally speaking on behalf of the soldier and motivating the industry, academia and those involved in research and development that lets become self-reliant. That was a very important message," he said.

Modi made a surprise visit to Ladakh on Friday during which he said the era of expansionism is over and that the history is proof that "expansionists" have either lost or perished, in comments were seen as a clear message to China.

The Indian and Chinese armies are locked in a bitter standoff in multiple locations in eastern Ladakh for the last seven weeks.

The tension escalated manifold after 20 Indian soldiers were killed in a violent clash in Galwan Valley on June 15. The Chinese side also suffered casualties but it is yet to give out the details.

India has been insisting on restoration of status quo ante in all areas of eastern Ladakh to restore peace and tranquillity in the region.

Tamil Nadu to ease curbs in Chennai from Monday, Madurai to remain under lockdown