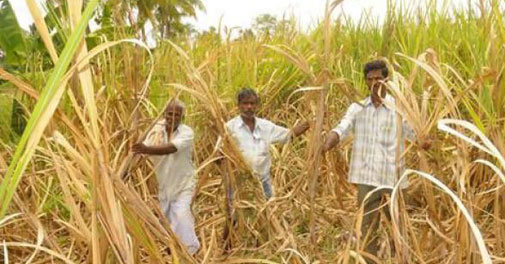 The Uttar Pradesh government and sugar millers are headed for a showdown with the industry refusing to start operations despite tax incentives to break the impasse over cane prices.

The government also warned mills of legal action if they did not start operations by next week.

However, millers are not happy with the tax sops saying the incentive only translates to Rs 6 per quintal reduction in sugarcane rate compared to requirement of Rs 55 per quintal subsidy to run their factories.

Striking a confrontationist note, they said they will not operate mills and were ready to "face any action".

Most of the 99 private mills out of state's 122 units have refused to start sugarcane crushing from October as they found the Rs 280 per quintal price set by state government as unviable, prompting even Centre to consider a financial bailout package for the industry.

The sops announced Thursday after three rounds of talks with factory owners, however, came with the caveat that the price of Rs 280 per quintal to be paid to farmers was not negotiable and millers will face action if they do not start operations.

"There is no scope for further talks (with millers). We are giving direction to start mills or face action," state Principal Secretary Sugar Industry and Cane Development Rahul Bhatnagar told reporters in Lucknow.

Soon after, Indian Sugar Mills Association Director General Abinash Verma said: "We will not start crushing operations unless a reasonable price is fixed and Rangarajan committee's recommendation (on linking cane rates with sugar prices) are accepted".

He said the current market price was not viable for buying sugarcane at Rs 280 per quintal and urged the state government to "get out of the politics of fixing cane price."

In New Delhi, Food Minister K V Thomas said the Centre was working on a financial package that may include interest free loans to the millers to break the logjam that not only was threatening sugar output, but also sowing of wheat.

Concerned over the delay in crushing operations, the Centre on its part has set up an informal ministerial group to work out a financial package.

Thomas appealed all stakeholders to settle the issue at the earliest even as he said that the opening stock of 89 lakh tonnes is sufficient to meet demand for next 4-5 months.

Taking a tough stand, the state government said it will take legal action if sugar mills in western districts do not start crushing by December 4 and others by December 7.

Till Wednesday, three mill owners were booked in Muzaffarnagar for failing to start mills.

Ruling out any reduction in cane price, Bhatnagar said after the current tax waiver, mills are in a position to pay the cane price of Rs 280 per quintal announced by the state government for 2013-14 season.

Mills, however, reiterated that they cannot pay more than Rs 225 per quintal due to poor financial condition. If UP government forces them to pay the current cane price, arrear could rise from Rs 2,400 crore to Rs 15,000 crore by April.

Also, sugar production would be affected if crushing is delayed for more than ten days, ISMA's Verma said.

He further said that mills do not have working capital to operate as banks, including SBI, Punjab National and Allahabad Bank, have also refused to provide loans.

"We are prepared for all kind of actions. We have offered the state our mills if they think they can operate better at current cane prices," he said.

So far, 21 mills have started operations, of which 16 are cooperatives and four of them are private owned and one is state-owned, as per the state government.

A panel headed by UP Chief Secretary has been formed to look into all aspects related to fixing of sugarcane prices.

On the basis of recommendation of this committee, the state government will fix state advisory price (SAP) of cane from 2014-15 marketing year onwards.