Backing the BJP-led NDA government's pitch for a self-reliant India, the RSS chief said swadeshi means to promote and give preference to indigenous products or technologies and not necessarily boycott all foreign items 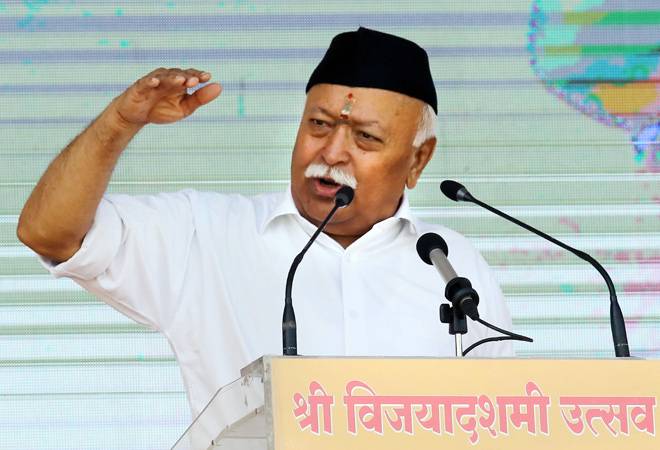 Swadeshi does not necessarily mean boycotting every foreign product, RSS chief Mohan Bhagwat said on August 12 asserting that only those technologies or materials may be imported which the country lacks traditionally or are not available locally. Talking about the relevance of being self-reliant and swadeshi in the wake of COVID-19, he suggested that the pandemic has made it clear that globalisation did not yield desired results and one economic model cannot be applicable everywhere.

Mutual cooperation among self-reliant countries while considering the world as one family and not one market seems to be the economic model required for the post-COVID world, Bhagwat said while speaking at a virtual book launch event. Backing the BJP-led NDA government's pitch for a self-reliant India, the RSS chief said swadeshi means to promote and give preference to indigenous products or technologies and not necessarily boycott all foreign items.

He made it clear that only those materials or technologies should be imported which are not available locally or India lacks traditionally and these should be modified in an Indian manner. Citing a few examples when traditionally available products and technologies were overlooked for imported ones, Bhagwat emphasised on the need for change in mindset and not considering domestic items as inferior.

Noting that even after independence, policymaking in India was influenced by the west and other foreign countries, Bhagwat said as a result many locally available products and technologies were overlooked in favour of foreign items. Describing the recently-announced National Education Policy as a "step in the right direction" to make India self-reliant, he said such policies will help India realise the potential of its people and of traditional wisdom.

The concept of swadeshi which talks about promoting local products and restricting the inflow of foreign investment and items features prominently in RSS ideology. Its affiliate Swadeshi Jagran Manch has been at the forefront of a campaign to boycott Chinese products.