On visiting the farms of Malla Ramgarh, Nathuakhan, Odakhan and Hartola, the reporter found that the farmers are getting merely Rs 12 to Rs 18 per kg for the tomatoes, for which the Delhiites had recently paid over Rs 100 per kg. 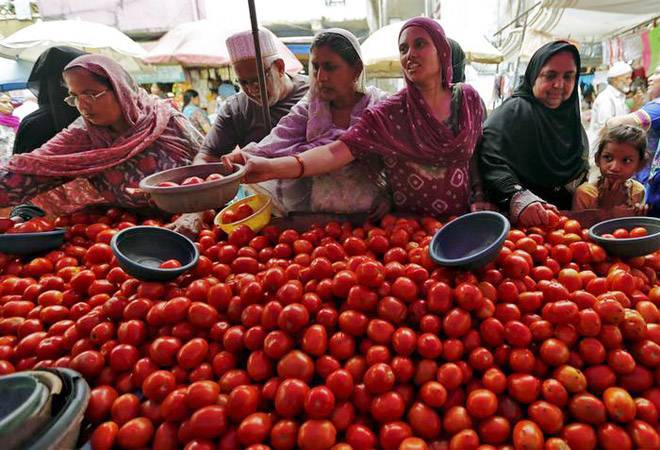 At a time when the price of tomatoes is skyrocketing, an INDIA TODAY TV-AAJ TAK investigation has revealed that the farmers in remote villages of Uttarakhand are getting only 12 to 20 per cent of what we are paying for a kilogram of tomatoes.

The price of tomatoes increases by six-seven folds by the time it reaches your plate. This reporter visited Ramgarh area of Uttarakhand, a hill station 340 km from Delhi with plenty of tomato farms.

On visiting the farms of Malla Ramgarh, Nathuakhan, Odakhan and Hartola, the reporter found that the farmers are getting merely Rs 12 to Rs 18 per kg for the tomatoes, for which the Delhiites had recently paid over Rs 100 per kg. Ravi Nayal, a local farmer from Malla Ramgarh, says that the reason behind getting extremely less rates is brokers, middlemen and a lack of transport facility.
"The hilly areas have good roads now, but they are not constructed till each and every farm. We work really hard to grow tomatoes throughout the year and during monsoon, we get a chance to earn some money. But the middlemen and brokers never pay us even closer to the rates of the metropolitan cities," Nayal said. He said that tomato farming is quite risky as tomatoes can hardly be stored in the cold storage. So once the ripe crop is out for sale, no farmer wants to halt it even for an hour.
"This is when the middlemen come into the picture. They never come in front of us. All they do is make an offer over a phone call," Nayal explained.
"As soon as the farmers get a call, they settle for whatever rates the broker or middlemen offer. As the majority of farmers don't have vehicles to ferry their vegetables to Delhi or other parts of the country, they completely depend on such people and agree to whatever rates they offer," he added.
Dinesh Singh Koranga, a farmer from Hartola village near Ramgarh of Uttarakhand, echoes a similar sentiment. He says the problem starts when he has a bumper crop.
"For a consignment of 10-20 kgs of tomatoes, which is largely sent to local markets, we are getting the rate of Rs 30-Rs 40 per kg. But if we want to sell large quantities of crop, we have to follow the system. The system here means a chain of people we must deal with. We don't have the money or facilities to transport our tomatoes to other cities. So we follow the routine and take whatever money we are offered," said Koranga.
Koranga also has farms of Cabbage, Capsicum and other vegetables. He says he gets hardly 20 per cent of what we pay for such vegetables in Delhi and NCR. "We have a TV. We watch news channels. We know Delhiites had paid Rs 100 per kg for our tomatoes recently," he says with a smile on his face. On Thursday, this reporter visited Azadpur Mandi of Delhi, Asia's largest wholesale fruit & vegetable market, to know the rate of tomatoes. The wholesale rates were found to be between Rs 35 and Rs 50 per kg, far from what Nayal and Koranga had said.
Asked about the gap in the minimum rates of tomatoes in Delhi and Ramgarh, Vijay Agarwal, a wholesaler at Azadpur Mandi said, "We don't force any farmer to sell his crop on low rates. Whatever happens here is in front of you. As soon as the farmers reach with their crop, we sell it to different retailers and keep our margin."
Another wholesaler Mahavir Singh said, "A majority of farmers come here with trucks laden with their crop. Some businessmen also come to sell their tomatoes after purchasing it from farmers. We can't say on what rate they had bought the tomatoes. Rates in the Mandi are fixed."
In Association with MAIL TODAY
Tags: tomatoes | farmers | Uttarakhand | tomatoes price | Cabbage | Capsicum