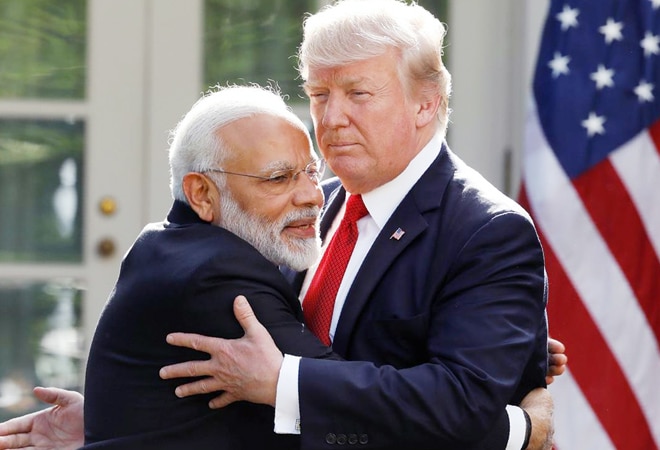 The Trump campaign believes that the Indian-Americans can play an important role in this election, especially in the battleground states like Michigan, Pennsylvania, and Ohio, where the two rival campaigns would be battling for every vote

Aiming to woo the influential Indian-American voters numbering over 2 million, the Trump campaign has released its first video commercial that has short clips from Prime Minister Narendra Modi's speeches and US President Donald Trump's historic address in Ahmedabad.

Modi and Trump addressed a huge crowd in Ahmedabad during the US president's visit to India in February this year. Trump was also accompanied by his wife Melania, daughter Ivanka, son-in-law Jared Kushner and top brass of his administration on his trip to India.

The president's son Donald Trump Jr, who is leading the campaign and is well connected with the Indian-American community, also retweeted it as the commercial soon became viral on social media with over 66,000 views on Twitter in the first few hours.

Titled "Four More Years" the 107-second video starts with the iconic footage of Modi and Trump walking hand in hand at the NRG Stadium in Houston during the prime minister's visit to the US last year wherein the leaders of the world's two largest democracies made a joint address before a strong crowd of Indian-Americans numbering more than 50,000.

Amidst cheering of thousands of his supporters in the US, Modi is seen as saying that Trump "needs no introduction" and that "his name comes up in almost every conversation."

He is the president of the United States of America "Mr Donald Trump", the prime minister says at the start of the video, that has been conceptualised by Al Mason, co-chair of the Trump Victory Indian American Finance Committee.

Modi is highly popular among Indian-Americans. His star appeal has attracted record crowds. His address at the Madison Square Garden in 2015 and then in the Silicon Valley two years later, both attracting more than 20,000 people, making the prime minister perhaps the only foreign leader in recent memory to have addressed such huge rallies in the US.

His "Howdy Modi" address in Houston last September was attended by a record 50,000 people. Trump made a solo trip to Houston to join Modi in addressing the historic rally.

After Modi introduces Trump to "my family", the second part of the commercial has clips form Trump's address in Ahmedabad this February.

"America loves India. America respects India. And America will always be a faithful and loyal friend to the Indian people," Trump says in the commercial in which he praises the contribution of four million Indian-Americans.

"They are truly spectacular people," the president said.

The commercial comes following a research by Mason in battleground States according to which the Indian-Americans, who traditionally vote for the Democrats, are switching over to the Republican party in significant numbers because the friendship that Trump has with Modi and the latter's high popularity among a large section of the community, of which 2.5 million are eligible to vote.

Mason's survey was conducted before former vice president Joe Biden, the Democratic Party's presidential candidate, selected Indian-origin Senator Kamala Harris as his running mate, a move the Democratic Party leader believes would stem the flow of Indian-Americans towards the Republicans.

However, both President Trump and his campaign, in recent remarks, asserted that more Indian-Americans support them than the Democrats. In various writings and statement, the Democratic leaders in recent weeks have apprehended that Trump's friendship with Modi might sway their traditional vote bank this November election.

The Republican National Convention now almost in a virtual mode is being held next week. President Trump is expected to deliver his nomination acceptance speech from the White House lawns on August 27.

The Trump campaign believes that the Indian-Americans can play an important role in this election, especially in the battleground states like Michigan, Pennsylvania, and Ohio, where the two rival campaigns would be battling for every vote. It has also created separate coalitions for the Indian-Americans and Sikhs. For the first time, a presidential campaign has created a coalition group for the Hindus.

The rival Democratic campaign too is coming out with ideas and commercials to woo Indian-Americans. Democratic National Committee chair Tom Perez has addressed the community virtually, wherein he has acknowledged the key role that the Indian-Americans can play in the battleground States.

On August 15, both Biden and Harris made a video address at an Indian-American event. The campaign has released a policy paper for Indian--Americans.

A day earlier, a Silicon Valley-based Indian-American political couple released a musical campaign video targeting Indian-Americans in the battleground states and urging them to vote for Biden and Harris.

Democratic supporters are planning to release at least two more Bollywood-style video commercials to attract the Indian-Americans, as the campaign heats up in the next 70-plus days.