Who got more FDI - Manmohan or Modi?

While FDI inflows have shot up under the Modi government, the inflow growth rate has been dipping and FDI as a proportion of GDP had actually peaked under UPA-I 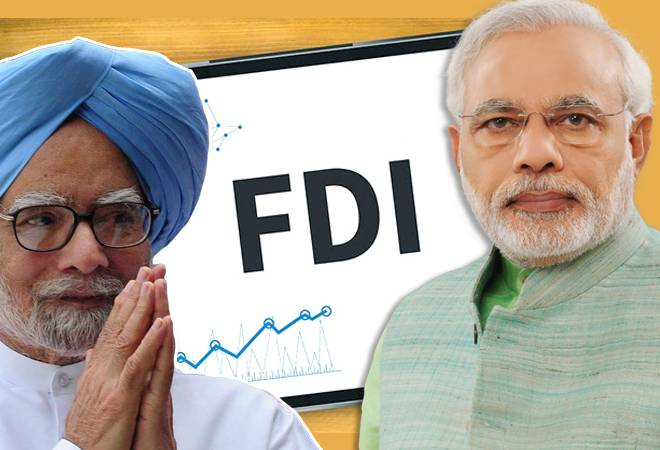 Numbers never lie, but whether they tell the whole story is entirely debatable. If you look at India's FDI numbers, at first glance it's clear that the Modi regime's efforts to encourage investment have paid off. Indeed, the graphic shows that FDI inflow had shot up nearly 45% between FY14 and FY15, reaching $31.2 billion in the current government's first year in office. According to a release by Ministry of Commerce and Industry, the FDI inflow to India in 2016-17 mushroomed to a record $60.08 billion, up from $55.6 billion in the previous fiscal.

In comparison, the highest FDI statistic achieved by the UPA government in both its terms was $22.3 billion in 2008-09. Moreover, while the country reportedly averaged $18.2 billion in FDI annually under UPA I and $38.4 billion under UPA II, in the Modi government's four years the figure increased to $52.2 billion.

But, even if we leave aside the issue of the BJP stonewalling the Congress-led UPA government's decision to allow FDI in multibrand retail back in 2012, the FDI numbers don't tell the full story. According to BloombergQuint, FDI inflows as a percentage of gross domestic product - an indicator used to measure the strength of an economy - had peaked at 3.6% under UPA-I in 2008 - the highest since 1975. World Bank data shows that FDI as a proportion of GDP had gone from 0.9% to 2.7% under UPA-I but the ratio fell to 1.7% under UPA-II.

Furthermore, despite Prime Minister Narendra Modi's 'Make in India' campaign and improvement in Ease of Doing Business rankings, the country's FDI inflow growth rate has actually seen a decline in the past few years - from 27% in FY15 to a mere 1.24% in FY18.

Interestingly, the Department of Industrial Policy and Production (DIPP), which had been posting FDI figures on its website quarterly since July 2015 - and cumulatively every month since November 2005 - has not published any statistics for the past six months. The last time the department published this data was in August 2018 and that was for the April-June period.

This is despite the Reserve Bank of India (RBI) regularly releasing its own quarterly and monthly estimates which DIPP uses as inputs along with its own databases to compile total investment inflows.

The AT Kearney FDI Confidence Index 2018 also carried some bad news. While India remains the largest investment destination in the subregion, largely due to its large and growing market, the country slipped three notches to 11th ranking in 2018 compared to the previous year. In fact, this is the first time it has fallen out of the top 10 since 2015.