Although the influx is still Rs 1,275 crore short of the peak observed in August 2019, the recovery indicated significant buying by mutual funds Inflows in equity mutual funds rebounded sharply in January with net inflows of Rs 7,877 crore as we moved closer to the Budget day. Although the influx is still Rs 1,275 crore short of the peak observed in August 2019, the recovery indicated significant buying by mutual funds. It was coupled with deployment of cash by equity mutual funds as cash holding hit an 18-month low, says the Mutual Funds Tracker report by Emkay Global Financial Services. 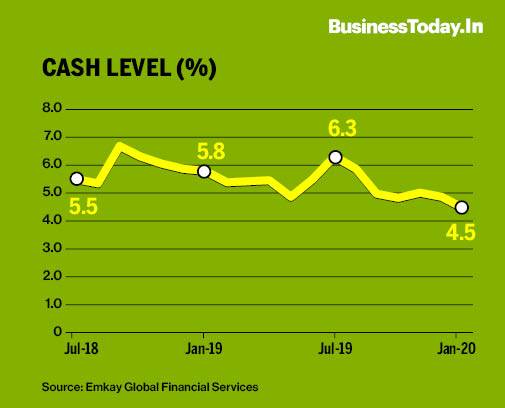 In the said month, equity funds continued to trim positions in IT services, in addition to metals and mining and oil & gas sectors. On the other hand, incremental buying happened in telecom and FMCG. "This showed some contrast against the behaviour of foreign portfolio investors (FPIs), who added to IT services and commodity weights, while trimmed banks, oil and auto sectors," the report added.

The markets, however, gave a thumbs down to the union budget which was presented on February 01. Sensex, the 30-scrip index tanked nearly 988 points on the budget day. Mutual funds pulled out Rs 224 crore from equity markets on that day after pumping in Rs 3,472 crore on the previous day, which was also their highest daily investment since October 11, 2019 (daily data was available with CMIE). These domestic institutional investors have invested Rs 580 crore till February 17. This is not even half the investments of the previous month. Mutual funds have been net sellers in only two months of the fiscal year 2019-20 with cumulative investments of over 50,000 crore during April-January FY20.

FPIs, meanwhile, withdrew Rs 4,376 crore from the markets on the budget day and pumped in Rs 9,457 crore till February 17. Unlike mutual funds, markets witnessed continued flows from FPIs since September 2019, who collectively invested Rs 66,305 crore in the first 10 months of 2019/20. The Sensex, which declined 1.3 per cent during January has given an average monthly return of 2.5 per cent between September and December 2019. 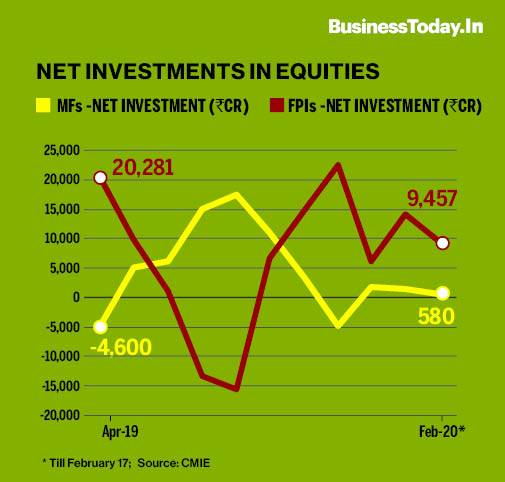