Pro-Pak slogans at anti-CAA rally in Bengaluru: The young student activist, identified as Amulya Leona has been sent to 14-day judicial custody on charges of sedition 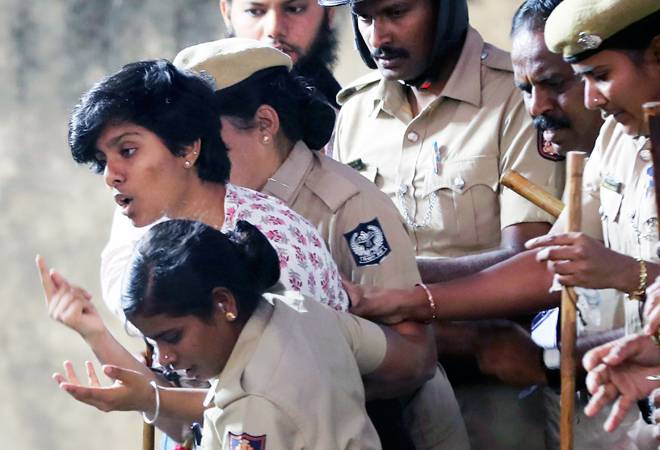 The police has taken the young woman into custody

The Bengaluru police had sent notices to the organisers of an anti-CAA rally where a 19-year old woman raised Pakistan Zindabad slogans. The police has also summoned them for questioning and registered a sedition case against this student activist.

The 19-year old has been sent to 14-day judicial custody. The young student activist has been identified as Amulya Leona.

#WATCH The full clip of the incident where a woman named Amulya at an anti-CAA-NRC rally in Bengaluru raised slogan of 'Pakistan zindabad' today. AIMIM Chief Asaddudin Owaisi present at rally stopped the woman from raising the slogan; He has condemned the incident. pic.twitter.com/wvzFIfbnAJ

Owaisi was visibly alarmed by her actions and condemned the slogans. He has also denied any links between her and the AIMIM party. He told reporters present that such people "are crazy and don't have any love for the country."

Apart from Owaisi, the first person to deny any association with Amulya was the JD(S) corporator Imran Pasha. Pasha claimed that Leona was planted by a rival group to divert from the event. He also said that her name wasn't included in the list of speakers and that the police should take this incident "seriously".

The BJP and the Congress have also condemned this event at the AIMIM's anti CAA-NRC rally. The BJP Karnataka tweeted that, "Those who support Pakistan should go there forever." The Karnataka Congress unit has also condemned the Pakistan Zindabad cries and urged the state to take strict legal action.

Truth is that protests against #CAA are a joint venture between Pakistan & Anti-National Forces led by @INCIndia.

Those who support Pakistan should go there forever. pic.twitter.com/GpknmmdKHt

After this incident, Leona's father described her actions as 'absolutely wrong'. He also said that he had asked her to not make such "provocative statements" or "get involved with Muslims" many times but she did not listen to him.

#WATCH "What Amulya said is wrong. She was joined by some Muslims&wasn't listening to me,"father of Amulya (who raised 'Pakistan zindabad'slogan at anti-CAA rally in Bengaluru today). He was confronted by unidentified men who were standing around him while he made the statement. pic.twitter.com/S0OQ2SpUXT