Farm growth holds out hope for the economy 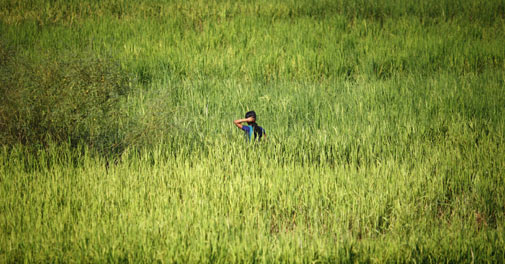 If the projection proves accurate, it will come as a shot in the arm for the ailing Indian economy . Robust agricultural growth is expected to contain inflation, support industry and services, and increase employment opportunities in rural India. It might also ease pressure on government employment schemes. A government statement said that the early monsoon season has had a positive impact on sowing. The reservoir position at the end of August was 29 per cent better than the overall average of the last 10 years.

Both Kharif and Rabi seasons are expected to produce good output. Agriculture's contribution to the overall gross domestic product (GDP) has fallen from about 30 per cent in 1990/91 to less than 15 per cent in 2011/12. Nonetheless, given that roughly half of India's workforce is engaged in agriculture, it remains the backbone of the Indian economy. Agriculture's performance assumes greater significance in view of the recently passed Food Security Act and the ongoing National Rural Employment Guarantee Scheme. Agriculture supports the vast majority of low income, poor and vulnerable people in the country. An average Indian spends almost half of his total expenditure on food. N R. Bhanumurthy, Professor at the National Institute of Public Finance and Policy, says this year's agricultural production will in turn drive industrial growth and consequently have a positive impact on services. "With all these, I will be not surprised if GDP growth is between five and 5.5 per cent," he adds. According to Bhanumurthy, low agriculture growth pulls down overall growth because of its indirect connection to industry and services. "The rise in agricultural activity will ensure a lower pressure on public spending and employment schemes. For the common man in urban areas, this should logically lead to lower inflation. In rural areas, there will be increased demand for employment in both farm and non-farm activities," he says.

But, Madan Sabnavis, Chief Economist at Care Ratings, says the projection is overstated. "I see agriculture growth in the range of three to four per cent," he says. High growth in agriculture will increase rural incomes, according to him. But how rural India will spend this income is unclear. "Since gold prices are higher than last year, gold will not attract sizeable rural spending. So, higher rural income will be mainly channelised into bank savings and consumer durables, automobile and housing," he adds. This will have positive implications for steel, cement and manufacturing industries. Migration from rural India may be checked. Sabnavis also said that agricultural commodity prices may not drop on account of higher output, but price increases will be moderate at best. He noted that agricultural output takes into account only the staple crops, while it is commodities like vegetables, eggs and milk that have been driving food inflation in recent times.
TweetYoutube
Tags: Farm growth | Indian economy | agricultural growth