The Lok Sabha today passed the Food Security Bill after a long debate that went on till later in the day. With today's development, the UPA Government's much talked about legislation has inched closer towards becoming an Act. 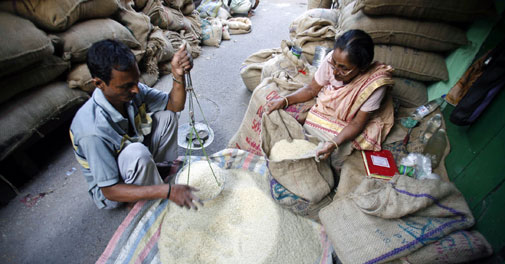 Ajay Modi
The Lok Sabha today passed the Food Security Bill after a long debate that went on till later in the day. With today's development, the UPA Government's much talked about legislation has inched closer towards becoming an Act. The Bill will now be debated upon in the Upper House or Rajya Sabha, followed by a voting.

To make up for time lost and to take up other important Bills as well, the Monsoon Session of Parliament was also extended till September 6. The session was to conclude on August 30.

Bharatiya Janata Party leader Murli Manohar Joshi said the Bill was not for food security but to secure votes as it was being brought only months before fresh general elections are to be held. He attacked the government for not having brought it earlier, despite being in power for over four years.

Samajwadi Party Chief Mulayam Singh Yadav said there was nothing in the Food Bill for the farmers. He added that the government should have discussed the Bill with others and sought the views of state governments before bringing it to Parliament.

The government brought the Food Security Ordinance, promising 67 per cent of Indians a legal right to demand subsidised grains every month, in July this year. The Ordinance needs to be passed by Parliament within six months to become an Act and thereby law.

The new Bill extends the current entitlement by reducing prices and giving such entitlement a legal status.

The timing of the legislation can indeed be seen as one of the efforts of the UPA to woo voters. In some ways it can be likened to the Rs 52,000-crore Loan Waiver Scheme of the UPA I ahead of the 2009 Lok Sabha elections. The Congress-led UPA II government had promised to implement the Food Security Bill within 100 days of forming a government in 2009. However, unproductive Parliament sessions and a focus on other issues have delayed its implementation.

"Given that India will hold five state elections in Q4 of 2013 and general elections in early 2014, the Congress likely wants to deliver on this promise as soon as possible", Standard Chartered points out.

A beneficiary can demand rice at three rupees a kg, wheat at two rupees and coarse cereals at one rupee. The scheme offers a uniform monthly entitlement of five kg grains for up to 75 per cent of the rural population and up to 50 per cent of the urban population. The entitlement of Antodaya Anna Yojana households - the poorest of the poor - will, however, continue at 35 kg per month.

The right cannot be claimed if there is a war, flood, drought, fire, cyclone or earthquake affecting supplies. The prices of the grains will remain the same for a three year period after which they may undergo revision. The government may in future look at schemes of cash transfers or food coupons to beneficiaries in place of the grain entitlement.

Like all welfare schemes, this one too will cost a good deal - much more than what is being projected. According to the government's calculations, the additional annual food subsidy implication will be about Rs 23,800 crore over the estimated food subsidy requirement under the existing public distribution system and other welfare schemes. The centre's total food subsidy, at 2013/14 costs, will be Rs 124,747 crore annually.

According to an analysis by Standard Chartered, the fiscal impact will not exceed 0.1-0.15 per cent of GDP in FY14, most of which has already been factored into the budget.

The scheme also faces opposition from some of the state governments who follow their own subsidised and successful distribution schemes. Raman Singh, Chief Minister of Chhattisgarh, has opposed the scheme. In fact, Singh's government stole the show last year by passing the Chhattisgarh Food Security Act 2012 before the Centre could deliver on the idea that was proposed by the Congress in its 2009 manifesto. The Act covers 90 per cent of the state's population and does not limit itself to cereals but also includes salt, black gram and other pulses at subsidised prices. Other states like Tamil Nadu and Madhya Pradesh also have their own subsidised grain distribution schemes.

The success and failures of this Ordinance will rest on the states as they need to implement and monitor the scheme.  A state level Food Commission will be set up for this purpose. States are free to continue or formulate their own food and nutrition based plan with their own resources to provide a benefit that is higher than the benefits under this Ordinance.

An important aspect of the Ordinance is the envisaged setting up of a grievance redressal mechanism at the state level through a network of call centres or customer care offices.

The Ordinance focuses on cereals at a time when both urban and rural India is spending less on cereals and more on non-cereals.

According to Standard Chartered, the scheme could increase demand-side inflationary pressures on non-cereal food products as households put their savings on cereals towards more protein-rich food products like pulses and dairy items. Without a corresponding effort to increase supply of other food products, the supply/demand mismatch may boost inflation in protein-rich items.

Rise of the Chief Data Officer