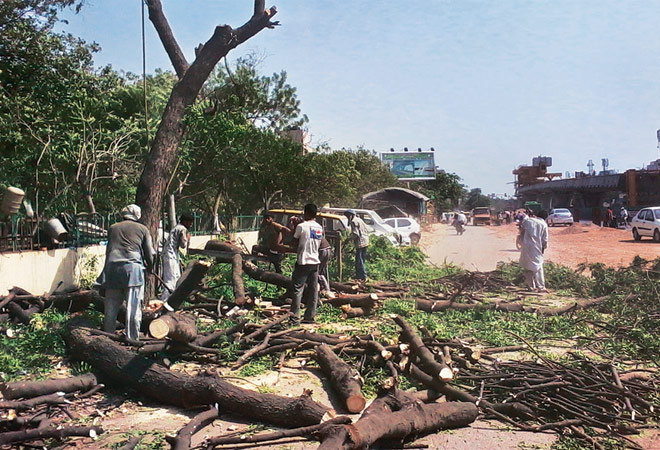 To clear infrastructure projects that have remained stuck for years, the Aam Aadmi Party (AAP) government is planning to tweak Delhi's green laws and strip certain tree species of all legal protection.

Several projects, including construction of elevated corridors and road-widening, have not moved at the desired pace in the absence of swift clearances from the forest department. The government move may now accelerate infrastructure development but will severely hit the Capital's green cover, caution environmentalists.

The plan to exempt Aam, Jaamun, Babool, Vilayati Kiker, and Eucalyptus from Delhi Protection of Trees Act (DPTA), 1994 will allow construction agencies to cut trees without following three mandatory steps: prior permission from the forest department (which may or may not come), and in case of approval, 10 times compensatory re-plantation, and a deposit Rs 57,000 for every tree cut.

Compensatory plantation has not been carried out satisfactorily so far because of non-availability of adequate land in Delhi, resulting in massive backlog. The government, however, claims the move will increase the green cover as there would be greater public participation in commercial agro forestry-currently not a viable proposition because of 'stringent' tree-protection statutes.

A senior official of the Public Works Department (PWD) headed by minister Satyendar Jain confirmed the move. "We will move a proposal to the state cabinet for exemption of some tree species from DPTA. We have cited cases of exemption in regions such as Rajasthan, Haryana and Western Uttar Pradesh because they all have Delhi-like ecology," the official said. The proposal is, however, already facing resistance from within the government.

The forest department under Environment Minister Asim Ahmed Khan has got back to the PWD and said such an exemption should not be allowed. Citing a research paper, the department has said these tree species have large canopies and they are instrumental in checking air pollution involving suspended particulate matter. "The development we're looking at through such measures will not be sustainable. Delhi's context is different. For example, Kikar may not be the best of species but it forms 80 per cent of entire Delhi ridge. Cutting them down will convert Delhi to a barren land," said an environment department official.

Jain has already written to Khan to expedite forest clearances. A top PWD official has met his counterparts from the forest department to emphasise the need to expedite construction projects. Khan has, on his part, met all deputy conservators of forests (DCFs) over the issue. PWD is the premier government agency that plans, designs, builds and maintains public infrastructure like hospitals and schools, besides roads, bridges, and flyovers. There are already voices of concern. "Delhi is not like other states. Here, every grown tree and all kinds of greenery are critical for mitigation of air pollution and rainwater harvest," environmentalist Manoj Misra said.

The PWD argues that if species which do not have much ecological value but are commercially viable are kept out of DPTA, the green cover will in fact go up because of public participation. "That way people will be able to cut and re-plant, something that is not happening now. Continued from Page 1 Just drive from Chennai to Coimbatore and see how this change is already taking place," said the PWD official. "The forest department should plant species with high ecological value. Green loss should be adequately compensated," he said.

Noted naturalist Pradip Krishen sees a design in this. "If they are taking these species off the list, it will cede dangerous power to agencies such as the PWD. As it is, government agencies easily manage to cut everything that comes in the way of their projects. The fresh move will further shrink Delhi's green cover," he said. Misra says the government has no case to permit unauthorised felling of even a single tree, no matter how pressing the reason is.

"You exempt one species and trees of every other species will be felled. If you challenge them, it would only lead to endless contestation and corruption," Misra said.

Krishen admits Vilayti Kikar has no ecological value. "Eucalyptus is a water guzzler. Mango is also a thirsty tree. But you cannot just cut them down. There has to be intelligent and habitat-specific replacement," he said. Officials of both departments (PWD and environment) will meet on Monday for a review. All DCFs have been told to provide information on why projects have been delayed.