The first major price hike in four years would mark an important step by Prime Minister Narendra Modi's new government to cut wasteful use of urea and ease fiscal pressures resulting from a weak economy. 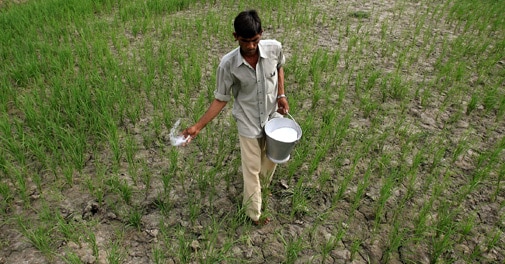 A farmer casts urea on his field in Simbhaoli, Uttar Pradesh. Photo: Reuters

The government plans to raise the price of urea, the fertiliser most used by the farmers, by at least 10 per cent in order to contain subsidy costs that are straining the budget.

The first major price hike in four years would mark an important step by Prime Minister Narendra Modi's new government to cut wasteful use of urea and ease fiscal pressures resulting from a weak economy.

Government and industry officials told Reuters: "A 2 to 3 per cent rise in urea prices won't make any meaningful difference in subsidy allocation. We are pitching for at least a 10 per cent hike."

The official requested anonymity because he was not authorised to speak to the media.

The proposal has the support of Fertilisers Minister Ananth Kumar, sources said. He has asked officials to prepare measures to implement it to either go before the cabinet or be included in Finance Minister Arun Jaitley's first budget in early July.

Sector stocks jumped on the news, with Chambal Fertilisers and Chemicals gaining 6.6 per cent and Tata Chemicals climbing as much as 2.6 per cent in early trading in Mumbai.

Fertiliser subsidy costs have quadrupled over the past decade as the previous government kept urea prices below the cost of production, fearing a backlash from the influential farm lobby.

A proposed doubling of natural gas prices is now expected to force the government's hand. Gas accounts for four-fifths of the cost of making urea, a nitrogenous fertiliser that consumes more than half of India's $11 billion annual fertiliser subsidy bill.

"The gas price rise is making the urea price hike a compulsion. The government has no choice. We are expecting a decision before the budget or in the budget," said a senior official with a state-run fertiliser company.

A spokesman for the Ministry of Chemicals and Fertilisers declined to comment.

The government had last year approved a hefty rise in gas prices to more than $8 per million British thermal units in a bid to boost returns for local energy producers, spur investment and ease acute power shortages.

Modi will have the final say on a proposal to implement the natural gas price hike from July 1. The gas price increase was put on hold during India's recent election, which Modi's Bharatiya Janata Party (BJP) won by a landslide.