Ushering in the biggest programme in the world to fight hunger, Parliament gave its nod to the landmark Food Security Bill which seeks to provide highly subsidised foodgrains to the country's two-third population as a right. 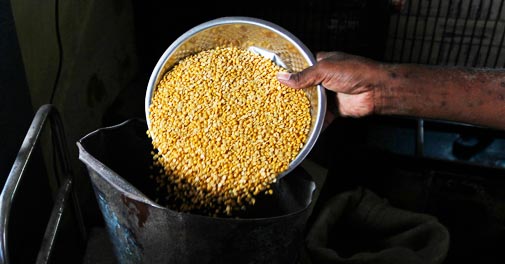 Ushering in the biggest programme in the world to fight hunger, Parliament on Monday gave its nod to the landmark Food Security Bill which seeks to provide highly subsidised foodgrains to the country's two-third population as a right.

The ambitious bill, seen as a game-changer by the government and expected to benefit 82 crore people in the country, cleared the Parliamentary process after much delay and uncertainty. It now needs just one more step - Presidential assent - to become a historic law.

The proposed legislation was approved by Rajya Sabha through voice vote after a combined discussion on the measure and a statutory resolution seeking to disapprove the ordinance promulgated on July 5.

All the amendments moved by the opposition to the bill, passed by Lok Sabha last week, were rejected. Some amendments, like the one moved by Samajwadi Party member Naresh Agrawal, were withdrawn while some members including BJP's Venkaiah Naidu and Prakash Javadekar did not press some of their amendments.

The bill was passed after a day-long debate during which the Opposition attacked the government, saying the measure was just repackaging of some existing schemes and a "gimmick" with an eye on elections.

The bill will guarantee 5 kg of rice, wheat and coarse cereals per month per person at Rs 3, 2, 1, respectively.

India will now join the select league of nations that guarantee majority of its population foodgrains. At Rs 1,30,000 crore government support, the food security programme will be the largest in the world. It would require 62 million tonnes of foodgrains.

Wrapping up the debate, Food Minister K V Thomas said he was "not saying it is 100 per cent perfect (scheme)" but it was the "first step" towards universalisation of Public Distribution System.

He allayed apprehensions that the measure would hurt federalism as he said the Centre will bear the major part of the financial burden. "The Centre and the state will have to work hand-in-hand," he said.