With the benefit of a single party majority in Lok Sabha for the first time in 30 years, laws that date back to just after the end of British rule are set for an overhaul. Officials at the labour ministry say this is a top priority in the government's first 100 days in office. 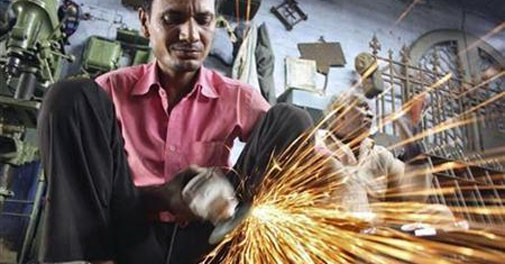 Prime Minister Narendra Modi has set in motion the first major revamp in decades of the archaic labour laws, part of a plan to revive the flagging economy, boost manufacturing and create millions of jobs.

Successive governments have agreed labour reform is critical to absorb 200 million Indians reaching working age over the next two decades, but fears of an ugly union-led backlash and partisan politics have prevented changes to free up labour markets.

Now, with the benefit of a single party majority in Lok Sabha for the first time in 30 years, laws that date back to just after the end of British rule are set for an overhaul. Officials at the labour ministry say this is a top priority in the government's first 100 days in office.

India has a forest of labour laws, including anachronisms such as providing spittoons in the work place, and are so complex that most firms choose to stay small. In 2009, 84 per cent of India's manufacturers employed fewer than 50 workers, compared to 25 per cent in China, according to a study this year by consultancy firm McKinsey & Co.

The World Bank said in a 2014 report that India has one of the most rigid labour markets in the world and "although the regulations are meant to enhance the welfare of workers, they often have the opposite effect by encouraging firms to stay small and thus circumvent labour laws".

Business leaders hope Modi, who advocates smaller government and private enterprise, will be a liberaliser in the mould of Margaret Thatcher or Ronald Reagan. Perhaps the most important change, they say, is to rules making it hard to dismiss workers.

First up, though, to win public support, his Bharatiya Janata Party (BJP) government is looking to make changes that benefit workers, three senior officials at the labour ministry said. Among the changes: making more workers eligible for minimum wages, increasing overtime hours and allowing women to do night shifts.

"We are trying to provide a hassle free environment that helps both workers and industry," a senior labour ministry official involved in the deliberations said. "It is a priority for us."

Next on the reform agenda will be the most sensitive issue of loosening strict hire and fire rules. Officials said they have begun preliminary talks with concerned groups about slowly implementing the changes.

"There is a definite push ... you will see more measures," said another official at the ministry who is privy to the discussions within the government.

India's 20-year streak of fast economic expansion is often derided as "jobless growth" since the service sector-led model has been capital rather than labour-intensive.

India does not produce reliable, regular jobless data, but long-term surveys by the statistics department show the country only created 5 million manufacturing jobs between 2004/5 and 2011/12. In the same period some 33 million people left farms looking for better paid work. The majority were absorbed into low productivity and irregular work on construction sites.

Moreover, research suggests India needs 12 million new jobs every year to absorb the largest youth bulge the world has ever seen. It has fallen far behind that target.

Manufacturing contributes just 15 per cent to India's nearly $2 trillion economy. New Delhi says it wants to lift that share to 25 per cent within a decade to help create 100 million jobs. Comparatively, manufacturing accounted for 45 per cent of China's GDP in 2012.

"If business cycles are volatile, the ability to downsize and upsize should be freely available," said R. Shankar Raman, chief financial officer at Larsen & Toubro, one of India's biggest conglomerates.

In what is seen as a test for Modi's labour reform agenda and is intended to inspire other states, Rajasthan this month proposed amendments to the central law to allow firms in the state to lay off up to 300 workers without government permission. Currently, clearance is required to fire more than 100 workers and this is rarely granted.

Labour unions cutting across party affiliations have opposed the state government's move and have asked Modi to intervene. The BJP's own union has called a meeting of its officials early next month to chalk out a strategy to protest what it said was a lack of consultation over the shake up in Rajasthan.

Since almost all the unions in India have political affiliations, their opposition to reforms has a risk of turning into a full-scale political agitation. But the risk that the reforms could also bring full-blown street protests similar to that seen in Thatcher's Britain are unlikely.

Labour militancy has declined in India, although sporadic violent protests like one at a Maruti Suzuki factory in 2012 which resulted in a death of a company official are enough to make policymakers wary on the pace of reform.

The labour ministry has asked for public comments by early July on the changes it plans to the Minimum Wages Act, which sets minimum wages for skilled and unskilled labours, and the Factory Act, which governs health and safety.

The proposed changes would standardize minimum wages nationally while increasing the frequency of salary revisions based on consumer prices. Although potentially inflationary, the move could bring millions of workers into the formal economy.

The ministry also wants to extend the amount of overtime workers can clock and scrap a 1948 rule that prohibits women working at night in factories, suggestions that have been welcomed by both labour groups and employers.