"Prime Minister will make an announcement on this," Finance Minister Arun Jaitley told PTI. He was asked what role the BJP government envisaged for the Planning Commission. 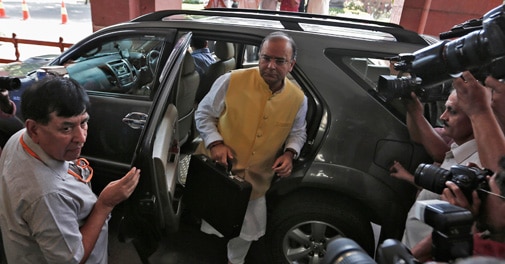 Finance Minister Arun Jaitley has said Prime Minister Narendra Modi will shortly announce the role that Planning Commission is going to play in his government.

Last month, the Independent Evaluation Office (IEO) had said that Planning Commission acted as a 'control commission' and should be replaced by a 'reforms and solution body'.

More than one and half months after BJP swept to power, the new government is yet to announce the new Deputy Chairman of Planning Commission, in place of Montek Singh Ahluwalia who held the post for almost a decade under the UPA regime.

"Prime Minister will make an announcement on this," Jaitley told PTI in an interview in the national capital. He was asked what role the BJP government envisaged for the Planning Commission. "Please wait you will hear soon (on the issue)," Jaitley said without elaborating.

The assessment sent to the Prime Minister recommended that a new think-tank be set up with experts of domain knowledge to replace the plan body.

"It is clear that the Planning Commission in its current form and function is a hindrance not a help to India's development. In my experience it is not easy to reform such a large ossified body and it would be better to replace it with a new body that is needed to assist states in ideas, to provide long term thinking and to help cross cutting reforms" said IEO's Director General Ajay Chhibber.

According to the assessment, the opaqueness in the functioning of the Planning Commission is a matter of concern considering its role as a major allocator of resources to states and central ministries.

Budget 2014: Smoking to be costly; colour TV, footwear set to be cheaper