The Reserve Bank of India has barred foreign investors from buying government debt with less than one year maturity in order to reduce the country's dependence on hot money, which can be taken out by FIIs at short notice and thus destabilise the rupee. 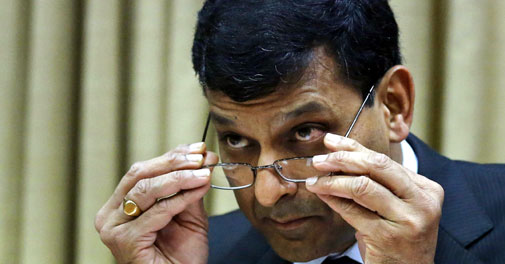 The Reserve Bank of India (RBI) has barred foreign investors from buying government debt with less than one year maturity in order to reduce the country's dependence on hot money, which can be taken out by foreign institutional investors (FIIs) at short notice and thus destabilise the rupee.

According to sources, RBI governor Raghuram Rajan is concerned about the excessive investment by FIIs in short-term treasury bills.

According to figures provided by Securities and Exchange Board of India (Sebi), foreign funds have utilised almost 90 per cent of the permissible limit of $5.5 billion in short-term treasury bills while the overall debt limit utilisation is much lower at 60 per cent.

At the same time, RBI has enhanced the limit for investment by FIIs in long-term government securities from $10 billion to $15 billion.

The total limit for investment in government securities has now gone up to $25 billion from $20 billion.

The objective is to attract more long-term stable flow of foreign investment to finance the current account deficit (CAD) and strengthen the rupee.

RBI has also taken a number of measures to attract foreign investment ever since the rupee slumped to record lows in late August, but it wants those investment to flow into longerterm securities. In February, RBI, along with Sebi, cut the sub-limit in commercial paper to $2 billion from $3.5 billion.

The country depends on capital flow to narrow CAD, which has reached a record 4.8 per cent of GDP last fiscal. Sudden outflow of money tends to destabilise the rupee. So far this calendar year, foreign investors have invested $3.65 billion in equities and $5.76 billion in debt. RBI also allowed foreign investors to hedge against coupon proceeds due within the Bar on govt debt with less than 1-yr maturity next 12 months while saying it is working to allow overseas funds to hedge via currency futures in domestic exchanges-neither of this was previously allowed.

"The Reserve Bank will continue to work to ease entry while reducing risk to foreign investors from the volatility of flow," RBI said in its policy statement. The announcements came as part of the Central bank's decision on Tuesday to keep interest rates unchanged.

>> RBI has asked banks not to levy penal charges on customers who don't maintain a minimum balance in basic savings bank accounts
>> Banks should also not take undue advantage of customer difficulty or inattention, RBI governor Raghuram Rajan said
>> Banks should limit services available on such accounts to those available to basic savings bank deposit accounts and restore the services when the balances improve to the minimum required level
>> Banks should also not levy penal charges if the minimum balance is not kept in any inoperative account
>> ICICI Bank and HDFC Bank customers are charged Rs 750 per quarter if they don't maintain a minimum average quarterly balance of Rs 10,000 in urban centres and Rs 5,000 in semi-urban areas

>> The revised draft of the Direct Taxes Code Bill has retained the income tax exemption limit at Rs 2 lakh and introduced a fourth slab of 35% on super-rich with income exceeding Rs 10 crore
>> The fresh draft of the Bill, posted on the website of the finance ministry, has lowered the age for tax exemption for senior citizens to 60 years from 65 years
>> In another significant step, the draft has suggested that foreign companies with more than 20% assets in India will be subjected to domestic tax laws
>> The ministry has rejected the recommendations of the Standing Committee on Finance, headed by senior BJP leader and former Union finance minister Yashwant Sinha, to raise the income tax exemption limit to Rs 3 lakh and to adjust other slabs saying that it will lead to an annual loss of Rs 60,000 crore to the exchequer