The decline in Maruti's sales just when it looked like the worst was over in October, adds to the narrative of a deepening slowdown in the overall Indian economy now inching towards a recession The reprieve from the festive season for the domestic automobile industry is proving to be very short-lived. India's largest carmaker Maruti Suzuki India, which had posted a 2.3% increase in sales in October breaking a series of seven straight months of decline, fell again in November posting a 3.3% drop in its passenger vehicle sales over the last year.

The company dispatched 139,133 units to its dealerships across the country last month against 143,890 units in October last year. In absolute terms this was Maruti's highest sales in any month this fiscal.

The last time it had posted higher sales than this was in March 2019 when it had sent 145,031 units to its dealers. Even then, the decline is largely because of the high base of last year in November when the festival of Diwali had fallen during the month. This year both major festivals--Dussehra and Diwali, were in October. 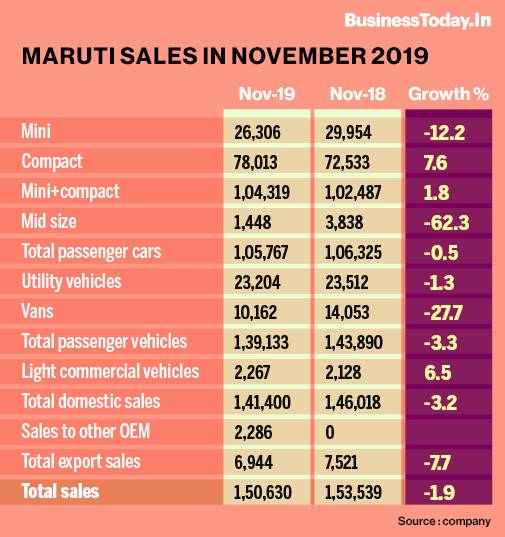 The addition of a new model-S Presso, in October, helped the company reduce the rate of decline in sales in its entry-level mini car segment that has been the worst hit by the overall slowdown in the industry. That category for the company saw a 12.2% decline in the month that was much lower than the over 50% decline in the first 6 months of the fiscal.

In the compact segment that comprises some of the company's bestselling models like Swift, Baleno, Dzire and new Wagon R, the company posted a growth of 7.6% last month at 78,013 units. This represented a turnaround from the 17% decline in the segment in the first half of this fiscal. Overall mini and compact segment growth during the month was a marginal 1.8%.

India's automobile industry is bracing itself for a unique challenge in the first quarter of 2020 when the transition of BS-IV to BS-VI emission norms has to be made at the stroke of midnight on March 31, 2020.

No BS-IV vehicle could be sold from April 1, 2020, which means automakers would have to reduce their inventory on BS-IV models to zero by then. The exercise is likely to see companies show extra caution in dispatching cars to dealers in the next few months, which may cause a continuation of the decline in wholesale numbers.

"The BS IV to BS VI transition is very scary for the industry. We cannot produce so many BS-IV vehicles and cannot wait for the last moment to liquidate the stocks. We have to do it much in advance. We are all adjusting the production for that, so the growth doesn't show up in wholesale numbers," said Kenichi Ayukawa, managing director and CEO, Maruti Suzuki India Ltd.

"Fortunately, almost two-thirds of our portfolio is already BS-VI ready and we have announced that we will not sell diesel cars from April 1. So the uncertainty from our side is a little less. By January our entire portfolio will be BS-VI. (Still) Next few months will continue to be challenging."

The other segments also registered a decline for the company during the month. In the mid-size sedan segment, its sole offering Ciaz suffered a 62.3% decline and the sale of vans saw a near 28% decline largely due to the discontinuation of its long-standing Omni van earlier this year.

The company's utility vehicles and SUVs that were one of the outlier segments also saw a fall in volumes last month. Maruti's utility vehicle portfolio witnessed a 1.3% decline in November. Exports also declined by 7.7% during the month while overall sales of the company in November fell nearly 2% at 150,630 units.

The decline in Maruti's sales just when it looked like the worst was over in October, adds to the narrative of a deepening slowdown in the overall Indian economy now inching towards a recession.

On Friday, the government released its GDP growth figures for the second quarter of this fiscal (July-September 2019) which showed growth has slowed down to a 26 quarter low of 4.5%. As the November figures show, the fear is that the third quarter maybe even worse.