So far in the fiscal year 2019-20, the cement production has declined in four months out of seven 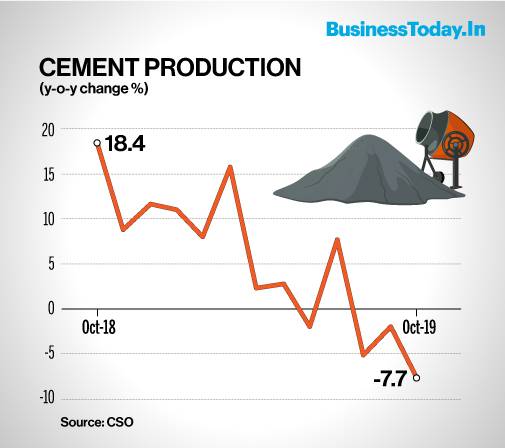 On cumulative basis, the production declined by 0.6 per cent between April and October 2019 over the corresponding period of previous year. The production rose 15 per cent between April and October 2018. The demand scenario continues to remain bleak although most of the dealers had pinned hopes on demand revival post Diwali. "Recent interactions suggest that demand has clearly failed to pick-up post the festive season and the scenario continues to remain bleak," highlighted a note by YES Securities.

PAN-India average prices (billing) stood at Rs 340 per bag for November (prices adjusted for exclusion of price discounts/special discounts), declining 1 per cent month-on-month and 3 per cent since September 2019. The PAN-India wholesale prices hovered around Rs 326 per bag as compared to Rs 329 per bag in October. Decline in the central, southern and western regions was much sharper at 2 per cent over the last two months. "Central markets had witnessed slowdown due to sand mining issues in Madhya Pradesh. The same stands resolved with construction activities picking up gradually," added the YES Securities note. Price hikes in Andhra Pradesh and Telangana in the first week of November has been rolled back completely while November exit whole sale price stood at Rs 260/ per bag (A brand). Although demand remains relatively healthy in markets such as Kolkata, attempts to hike prices have failed due to heightened competitive intensity with average wholesale prices hovering as low as Rs 280 per bag (A brand), points out the note. Sluggishness in real estate space continues with no signs of respite while liquidity crunch prevails. 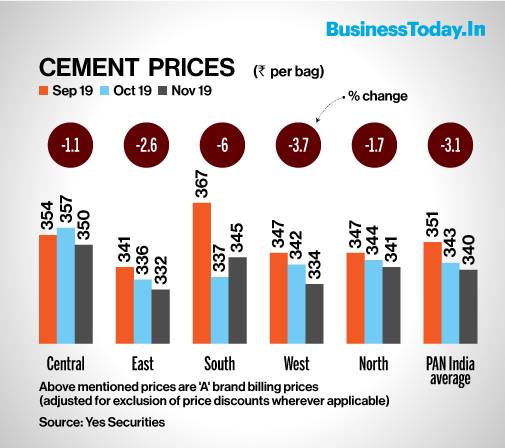