Coal freight traffic which accounts for almost half of the total traffic declined by 2.3% in the first nine months of 2019-20 as against a 10.1% rise seen in the year-ago period Growth in railway freight traffic contracted to a three-year low of (-)0.6 per cent during April-December 2019. During the period under review, it stood at 890.7 million tonnes, lower by 5.2 million tonnes in the corresponding period previous year. As per CMIE data, during the same period, the previous two fiscals recorded a growth of 5.6 per cent and 4.8 per cent, respectively. As per the data available for the last five years, the only other period to witness a reduction in the first nine months was 2016-17, at 8.0 per cent. 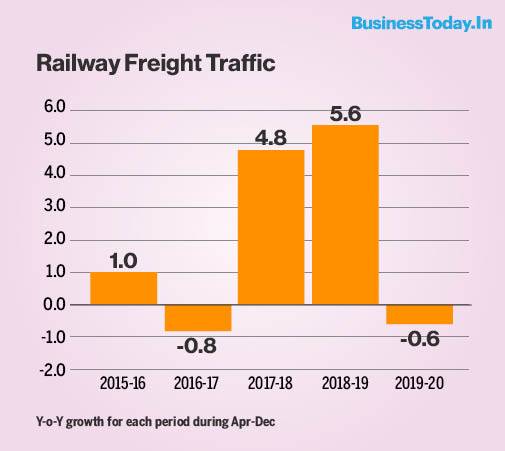 Coal freight traffic which accounts for almost half of the total traffic declined by 2.3 per cent in the first nine months of 2019-20 as against a 10.1 per cent rise seen in the year-ago period. The coal movement meant for steel plants, thermal power plants as well as that for other public users reduced during the period under review. The fall in coal freight traffic was due to subdued domestic production of the fuel. Output of Coal India (CIL), which produces over 80 per cent of the country's total coal production, declined by 5.8 per cent during the April-December period of the current year.  According to CMIE, CIL's output was impacted owing to reasons like flooding in coal mines due to heavy rainfall, fatalities at MCL and SECL, law and order issues in some major mines, and several employee unions' strikes.

On the other hand, iron ore freight traffic surged, thus restricting a further fall in overall freight traffic, during the period. It rose by 11.1 per cent in the first nine months of the current financial year, backed by a surge in exports. Exports of iron ore have increased by a robust 139.7 per cent during April-November 2019 over the previous year. In the month of December, though, railways freight traffic recorded year-on-year (y-o-y) growth of 4.3 per cent, highest in the current fiscal.  Coal, cement and iron ore account for approximately 70 per cent of total traffic. They grew 1.5 per cent, 5.7 per cent and 16.5 per cent, y-o-y, respectively, during the month. 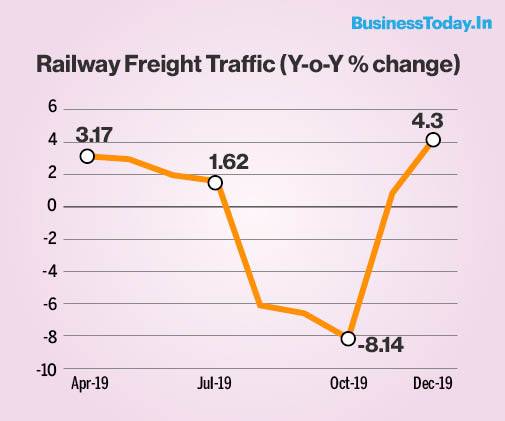