Pictures of floating bodies were broadcast on television and relatives of the missing already gathered at a crisis centre in Surabaya wept with heads in their hands. Several people collapsed in grief and were helped away. 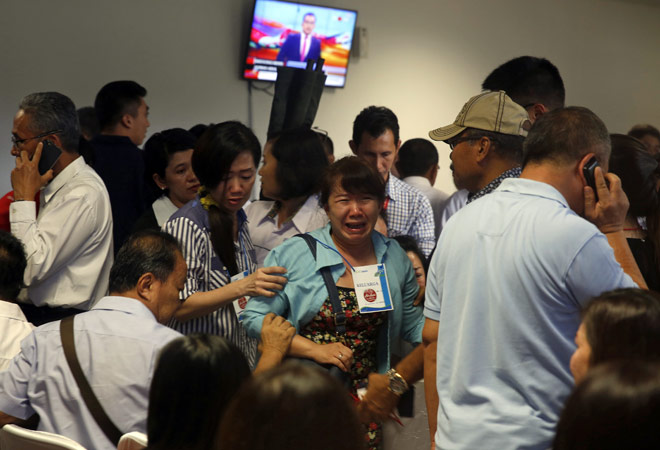 Family members of passengers on board AirAsia flight QZ8501 cry at a waiting area in Juanda International Airport in Surabaya on December 30, 2014.Photo: Reuters

Indonesian rescuers searching for an AirAsia plane carrying 162 people pulled bodies and wreckage from the sea off the coast of Borneo on Tuesday, prompting relatives of those on board watching TV footage to break down in tears.

Indonesia AirAsia's Flight QZ8501 , an Airbus A320-200, lost contact with air traffic control early on Sunday during bad weather on a flight from the Indonesian city of Surabaya to Singapore.

The navy said 40 bodies had been recovered. The plane has yet to be found.

"My heart is filled with sadness for all the families involved in QZ8501," airline boss Tony Fernandes tweeted. "On behalf of AirAsia, my condolences to all. Words cannot express how sorry I am."

The airline said in a statement that it was inviting family members to Surabaya, "where a dedicated team of care providers will be assigned to each family to ensure that all of their needs are met".

Pictures of floating bodies were broadcast on television and relatives of the missing already gathered at a crisis centre in Surabaya wept with heads in their hands. Several people collapsed in grief and were helped away.

"You have to be strong," the mayor of Surabaya, Tri Rismaharini, said as she comforted relatives. "They are not ours, they belong to God."

A navy spokesman said a plane door, oxygen tanks and one body had been recovered and taken away by helicopter for tests.

"The challenge is waves up to three metres high," Fransiskus Bambang Soelistyo, head of the Search and Rescue Agency, told reporters, adding that the search operation would go on all night. He declined to answer questions on whether any survivors had been found.

About 30 ships and 21 aircraft from Indonesia, Australia, Malaysia, Singapore, South Korea and the United States have been involved in the search.

The plane, which did not issue a distress signal, disappeared after its pilot failed to get permission to fly higher to avoid bad weather because of heavy air traffic, officials said.

Pilots and aviation experts said thunderstorms, and requests to gain altitude to avoid them, were not unusual in that area.

The Indonesian pilot was experienced and the plane last underwent maintenance in mid-November, the airline said.

The aircraft had accumulated about 23,000 flight hours in some 13,600 flights, according to Airbus.

Online discussion among pilots has centred on unconfirmed secondary radar data from Malaysia that suggested the aircraft was climbing at a speed of 353 knots, about 100 knots too slow, and that it might have stalled.

The plane, whose engines were made by CFM International, co-owned by General Electric and Safran of France, lacked real-time engine diagnostics or monitoring, a GE spokesman said.

Such systems are mainly used on long-haul flights and can provide clues to airlines and investigators when things go wrong.

Three airline disasters involving Malaysian-affiliated carriers in less than a year have dented confidence in the country's aviation industry and spooked travellers across the region.

Malaysian Airlines Flight MH370 went missing on March 8 on a trip from Kuala Lumpur to Beijing with 239 passengers and crew on board and has not been found. On July 17, the same airline's Flight MH17 was shot down over Ukraine, killing all 298 people on board.

Bizarrely, an AirAsia plane from Manila skidded off and overshot the runway on landing at Kalibo in the central Philippines on Tuesday. No one was hurt.

On board Flight QZ8501 were 155 Indonesians, three South Koreans, and one person each from Singapore, Malaysia and Britain. The co-pilot was French.

U.S. law enforcement and security officials said passenger and crew lists were being examined but nothing significant had turned up and the incident was regarded as an unexplained accident.

The AirAsia group, including affiliates in Thailand, the Philippines and India, had not suffered a crash since its Malaysian budget operations began in 2002.