Angela Merkel is TIME magazine's Person of the Year 2015

61-year-old Merkel, one of the most powerful women in the world, is the first female Person of the Year in almost three decades. 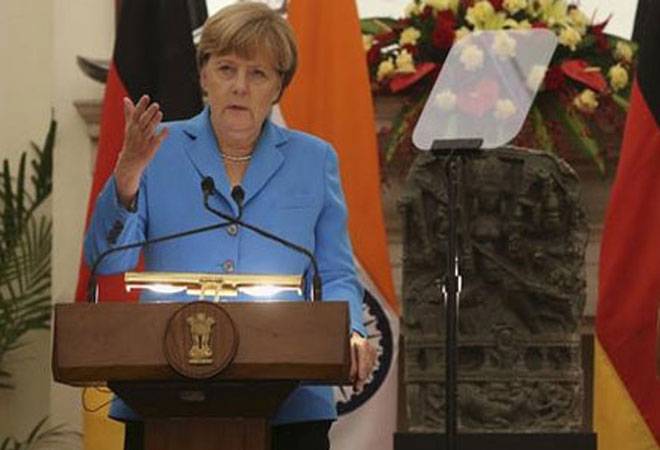 TIME magazine on Wednesday named German Chancellor Angela Merkel its "Person of the Year 2015", saying her deft leadership has helped preserve and promote an open, borderless Europe in the face of economic turmoil, ongoing refugee and the Ukraine crises.

61-year-old Merkel, one of the most powerful women in the world, is the first female Person of the Year in almost three decades.

"At a moment when much of the world is once more engaged in a furious debate about the balance between safety and freedom, the Chancellor is asking a great deal of the German people, and by their example, the rest of us as well. To be welcoming. To be unafraid. To believe that great civilizations build bridges, not walls, and that wars are won both on and off the battlefield," TIME said.

61-year-old Merkel, one of the most powerful women in the world, beat some of the world's best-known politicians and leaders including Iranian President Hassan Rouhani, Russian President Vladimir Putin, ISIS leader Abu Bakr Al-Baghdadi and Republican presidential hopeful Donald Trump for the annual honour.

TIME said Merkel was chosen as the person of the year because she is the "de facto leader" of a continent, "steward" of the world's fourth biggest economy, a "principled manager and a resolute diplomat" and her leadership has helped preserve and promote an open, borderless Europe in the face of economic turmoil and an ongoing refugee crisis.

"By viewing the refugees as victims to be rescued rather than invaders to be repelled, the woman raised behind the Iron Curtain gambled on freedom. The pastor's daughter wielded mercy like a weapon. You can agree with her or not, but she is not taking the easy road. Leaders are tested only when people don t want to follow."

"For asking more of her country than most politicians would dare, for standing firm against tyranny as well as expedience and for providing steadfast moral leadership in a world where it is in short supply, Angela Merkel is TIME's Person of the Year," the magazine said.

The magazine said it chose the German chancellor for the annual honor because her leadership has helped preserve and promote an open, borderless Europe in the face of economic turmoil and an ongoing refugee crisis.

Merkel is the first female Person of the Year in almost three decades. The last time a woman was bestowed the honour was in 1986 when Corazon Aquino, the first woman president of the Philippines was on the cover of Time magazine as its Person of the Year.

Merkel, herself a refugee who grew up in an undemocratic German Democratic Republic, has emerged as the "indispensable player" in managing Europe's serial debt crises and also led the West's response to Vladimir Putin's "creeping theft" of Ukraine.

Under her leadership, Germany bailed Greece out, it welcomed refugees as casualties of radical Islamist savagery, not carriers of it and deployed troops abroad in the fight against ISIS.

"Merkel brandished a different set of values - humanity, generosity, tolerance - to demonstrate how Germany's great strength could be used to save, rather than destroy. It is rare to see a leader in the process of shedding an old and haunting national identity," TIME said.

The magazine quoted the leader as saying, "If we now have to start apologising for showing a friendly face in response to emergency situations, then that's not my country."

The first runner-up for TIME Person of the Year is Al- Baghdadi, the head of ISIS who "exports extreme violence and twisted religion around the globe."

TIME described the 44-year-old ISIS leader as "the brooding muezzin of death" who leads the terror group.

"In 2015, al-Baghdadi... transformed the breakaway al- Qaeda group from a battlefield force operating in the chaos of Syria and Iraq into a transnational terrorist franchise killing civilians in more than a dozen countries around the world. Orchestrating deadly attacks against far-flung targets including sports stadiums, beach resorts and museums ISIS has killed more than 1,200 civilian victims outside of Iraq and Syria this year while luring a steady stream of recruits to the so-called Islamic State," TIME said.

On Trump, who made the "extraordinary call" to bar all Muslims from entering the US, the magazine said "everything" about him is a "challenge, a test even for the thousands of people who attend his rallies and cheer his outrages."

It said Trump's supporters hail his "tell-it-like-it-is toughness" and his defiance.

"He doesn't care who he pisses off," one supporter said.

"He says what everyone wants to say but are afraid to say," says another in the magazine.

US Senators introduce legislation to cut H1B visas by 15,000