In a joint statement after their informal meeting on the sidelines of the G-20 summit, BRICS (Brazil, Russia, India, China and South Africa) leaders also reiterated their commitment to fight the exploitation of internet for terrorist purposes. 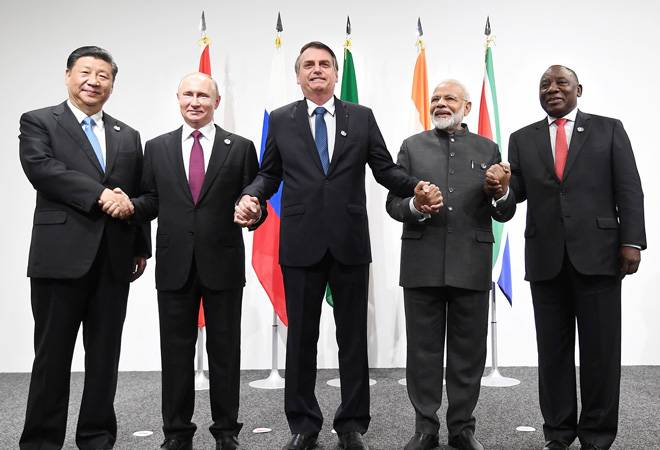 India along with other BRICS nations on Friday called on all states to prevent financing of terrorist networks and of terrorist actions from their territories, as they pledged to combat terrorism and illicit financial flow.

In a joint statement after their informal meeting on the sidelines of the G-20 summit, BRICS (Brazil, Russia, India, China and South Africa) leaders also reiterated their commitment to fight the exploitation of internet for terrorist purposes.

"We strongly condemn terrorist attacks, including against BRICS countries, in all forms and manifestations, wherever and by whom so ever committed," they said.

"We urge concerted efforts and a comprehensive approach to counter terrorism under the UN auspices on a firm international legal basis," the BRICS leaders said.

Without naming any country, the five leaders -- including Prime Minister Narendra Modi and Chinese President Xi Jinping -- reiterated that it is the responsibility of all states to prevent financing of terrorist networks and of terrorist actions from their territories.

While recognising that states have the leading role to ensure safety and security in the use of the information and communications technologies, they called on the technology companies to cooperate with governments, in accordance with applicable law, to eliminate the ability of terrorists to use digital platforms to encourage, recruit, facilitate or commit terrorist acts.

"We remain firmly committed to fighting corruption and will continue to foster integrity in the public and private sectors," they said.

The leaders of the five nations pledged to strive to promote international anti-corruption cooperation and strengthening of legal frameworks, as appropriate, to more effectively address cases of corruption especially related to assets recovery.

"We will seek to enhance our mutual efforts in the prosecution of persons sought for corruption. We recognise the role of whistle-blowers in preventing and combating corruption in both the public and private sectors and the need to improve measures to protect whistle-blowers," they said.

They said that corruption, including illicit money and financial flows, and ill-gotten wealth stashed in foreign jurisdictions, is a global challenge which may impact negatively on economic growth and sustainable development.

"We will strive to coordinate our approach and encourage a stronger global commitment on the issue," they said.

They recognised the need to strengthen cooperation, subject to domestic legal systems, in anti-corruption law enforcement, extradition of fugitives, economic and corruption offenders, and in recovering stolen assets.

"We reaffirm our commitment to support international cooperation in combating illicit financial flows, including cooperation within the Financial Actions Task Force (FATF), the World Customs Organisation and other relevant multilateral mechanisms," they said.

"We acknowledge the importance of varied sources of energy and technological advances to achieve a low emission future, such as solar energy, sustainable bioenergy and natural gas in transportation," they said.

The leaders said they were committed to the full implementation of the Paris Agreement, adopted under the principles of the UNFCCC, including the principles of common but differentiated responsibilities and respective capabilities, in the light of different national circumstances.

"We urge developed countries to provide financial, technological and capacity-building support to developing countries to enhance their capability in mitigation and adaptation," they said.

Recalling the 2030 Agenda for Sustainable Development, they reaffirmed their our strong commitment to sustainable development.

"We stress the importance of fully honouring official development assistance commitments and the provision of development resources, in accordance with the Addis Ababa Action Agenda.

"We continue to support the G20 Action Plan on the 2030 Agenda, the G20 Initiative on Supporting Industrialisation in Africa and Least Developed Countries and the G20 Africa Partnership, including the Compact with Africa," the five leaders said.

Recognising that innovation is a key driving force behind development, they reaffirmed our commitment to maximise the benefits of digitalisation and emerging technologies, including for the population of rural and remote areas.

"We encourage joint efforts to share good practices on internet-driven poverty alleviation and digital transformation of the industrial sector," they said.