Donald Trump vs. Hillary Clinton: Highlights from the first US presidential debate

The debate at Hofstra University drew a massive viewing audience to see the business mogul and former reality star face off with the first ever woman to win the democratic presidential nomination. 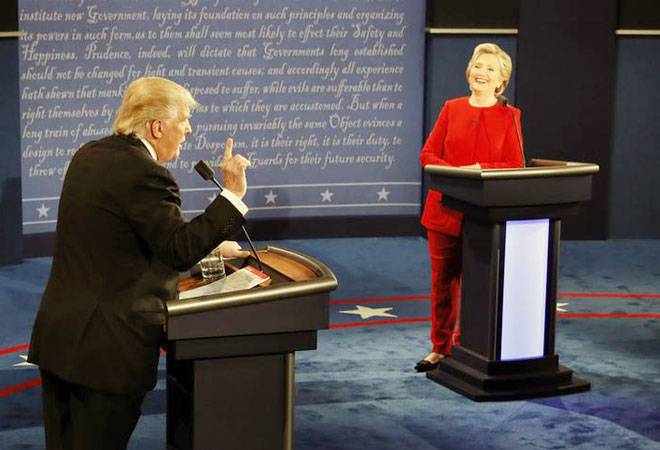 Donald Trump clashed with Hillary Clinton in Monday night's presidential debate on issues relating to taxes, economy, temperament and more, with the two contenders constantly interrupting one another with snide remarks.

The debate at Hofstra University drew a massive viewing audience to see the business mogul and former reality star face off with the first ever woman to win the democratic presidential nomination.

Here are the main highlights from the debate:

The firey debate quickly turned personal when  Clinton shot at Trump with a lengthy explanation of why Trump won't release his tax returns, concluding he's got something to hide.

Trump said he would "release my tax returns, against my lawyers' wishes," if Clinton agreed to release a cache of her emails.

Clinton often put Trump on the defensive, saying he had "rooted for" the collapse of the housing industry and had considered climate change to be a hoax. In another exchange, Clinton said, "I have a feeling that by the end of this evening I'll be blamed for everything that ever happened."

Trump interjected, "Why not?" Later on, Trump said he had a "winning temperament," prompting Clinton to respond: "Whew. OK."

Trump opened with an extensive argument that jobs are "fleeing the country" and going to Mexico while the U.S. economy is being undermined by China.

He pointed to Ford Motor Co.'s plans to build compact cars in Mexico and railed against Carrier's decision to move hundreds of air-conditioner manufacturing jobs from Indianapolis to Mexico.

Clinton pointed out that her father was a small businessman, adding, "The more we can do for the middle class, the more we can invest in you, your education, your skills, your future, the better we will be off."

Clinton said Trump would push for "trickle-down" tax cuts that would only benefit the wealthy, calling it, "trumped-up trickle-down."

Clinton turned the tables on Trump when he was asked to respond to his assertions that she doesn't have the "stamina" to be president.

Trump questioned whether Clinton has the physical fitness to be president and he repeated the criticism directly to her.

Clinton replied that Trump shouldn't talk about stamina until he's tried to maintain a busy schedule like that she kept up as secretary of state. And then she dug into him, adding, "This is a man who has called women pigs, slobs and dogs."

When Trump got in a dig at Clinton's absence from the campaign trail, she said there was nothing wrong with spending time preparing for the debate. "You know what else I did?" she asked. "I prepared to be president."

Trump has said black voters have "nothing to lose" by supporting his candidacy but he was forced to answer for his role in claiming Obama was born outside the United States.

Clinton accused Trump of spreading a "racist lie" that our "first black president" was not an American citizen, adding, "He has a long record of engaging in racist behavior."

Trump responded by recalling the bitter debates between Clinton and Obama during the 2008 Democratic presidential primary, saying Clinton treated Obama then with "terrible disrespect." Later, when Clinton said Trump's view of black communities was too grim, Trump sighed, rolled his eyes and said, "Ugh."

Trump injected an element of surprise when he said he disagreed with many Republicans and "we have to look at" barring the sales of guns to people on the terror watch list.

The proposal is sharply opposed by the National Rifle Association, one of Trump's chief backers, but Democrats have hoped it will change the dynamic of the gun debate. Trump also said he backs government aid for child care expenses, an issue that has been pushed by his daughter, Ivanka Trump.

Clinton and Trump have both proposed plans to help families pay for child care.

Staying the course on Iraq and Birtherism

Trump stood by his positions on two issues in which he has been frequently skewered by fact checkers: the Iraq war and his role in the so-called "birther" movement.

Trump denied Clinton's claims that he supported the Iraq war, saying it was a "mainstream media nonsense put out by her.

"I was against the war in Iraq," he said. But there isn't any evidence Trump expressed public opposition to the war before the U.S. invasion.

Trump also claimed that Clinton's 2008 presidential campaign was responsible for launching the birther movement that questioned Obama's American citizenship. That's not the case - Clinton's campaign never publicly pushed that notion during the 2008 primaries.

(With inputs from AP)