At issue is no longer whether the bank buys sovereign bonds, which has been widely flagged, but how the programme is designed and whether it is seen as credible and sufficient. 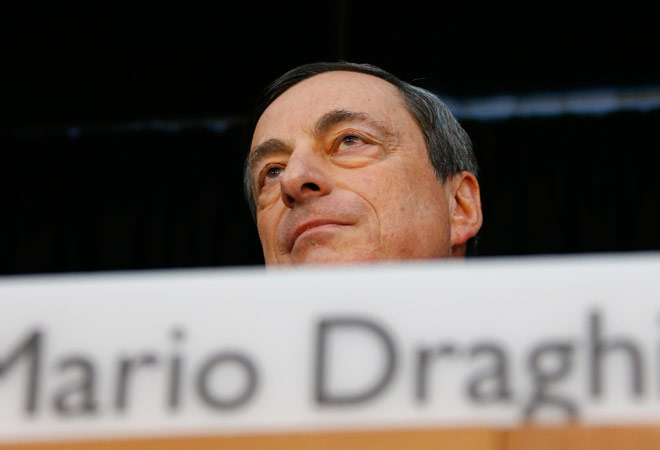 The European Central Bank faces a crucial test of its resolve to do "whatever it takes" to preserve the euro when it decides this week on buying government bonds to combat deflation and revive the economy.

The EU top court's adviser and the Swiss National Bank have smoothed the way for quantitative easing (QE), or printing money, but fierce opposition from Germany's central bank, politicians and public may yet shackle the ECB.

At issue is no longer whether the bank buys sovereign bonds, which has been widely flagged, but how the programme is designed and whether it is seen as credible and sufficient.

The risk is that the institution that has held the single currency area together through five years of debt crisis adopts a "QE-lite" plan that sends the wrong signal to markets, misses its target and jeopardises the bank's credibility.

News that ECB President Mario Draghi met German Chancellor Angela Merkel privately last week highlights the acute political sensitivity of the decision. While the Bundesbank is opposed to the policy, which it sees as a back door to monetary financing of feckless governments, creating potential liabilities for German taxpayers, the ECB is hoping Merkel won't denounce it and will restrain her conservative allies.

Some QE supporters fear Draghi may make too many concessions to Germany by framing a programme that is limited in volume and scope, doesn't share risk across borders and excludes buying bonds of countries with the lowest credit ratings.

A draft plan circulated by ECB staff this month would cap purchases at 500 billion euros. Some market analysts say it may need to be twice that size or open-ended to reach its objective.

Draghi has a majority on the policy-making Governing Council but the two German members, Bundesbank president Jens Weidmann and ECB executive board member Sabine Lautenschlaeger, seem sure to vote against QE. A handful of other governors may join them.

One option seriously under consideration, ECB sources say, is to make each national central bank in the 19-nation Eurosystem shoulder the risk of default on all or most of its own country's bonds that are purchased.

"This would be at best ineffective and at worst dangerous," said Guntram Wolff, director of the Bruegel economic think-tank in Brussels. "(It) would be a strong signal that the ECB is no longer a 'joint and several' institution."

Veteran Danish economist Niels Thygesen, one of the experts who designed original blueprint for the euro in the 1980s, told Reuters: "If these are the circumstances for some QE, it may not be worthwhile even for strong enthusiasts."

It would be a limited programme designed by lawyers as much as economists.

Yet by declaring ECB bond-buying legal and urging courts to be cautious in challenging the central bank when they lack the expertise, the European Court of Justice's advocate general last week effectively gave a green light for full-blooded action.

Although his opinion concerned a lawsuit brought by German Eurosceptics against a previous, as yet unused bond-buying scheme, it had a clear read-across to QE.

In particular, he argued that announcing limits on bond-buying in advance would undermine its effectiveness, that the ECB should not be given seniority over private creditors in case of a debt restructuring, and that there was no bar on it buying bonds of countries with low credit ratings.

This should give Draghi a free hand to buy bonds of all euro zone states proportionate to their contributions to the ECB's capital for as long as needed to get inflation back up towards target of just below 2 percent from close to zero now.

But the politics may make that impossible.

Economists distinguish two main ways in which QE, already used in the United States, Britain and Japan, works to revive an economy and raise prices - the "signalling effect" and the "portfolio effect".

In layman's terms, the former describes an unambiguous message to financial markets that a resolute central bank is determined to use unlimited resources to achieve its goal. The U.S. Federal Reserve is the frequently cited model.

"Just as markets know never to fight the Fed, they need to understand that you don't bet against the ECB," said a senior Eurosystem official, who is not authorised to speak publicly.

The latter term describes the mechanism through which a central bank creates money to buy bonds from banks, insurers and pension funds, who reinvest it in higher-return assets such as stocks or corporate bonds, often outside the euro zone. That exit of funds lowers the exchange rate, making exports cheaper and imports dearer, hence raising the inflation rate.

The euro has already fallen from nearly $1.40 in May 2014 to $1.15 last Friday, its slide gathering pace as expectations mount that the ECB will launch QE.

Switzerland's central bank lifted a hand-brake on the euro's fall last week when it abruptly abandoned a three-year-old cap on the Swiss franc's exchange rate, which had forced it to buy tens of billion euros to defend the peg of 1.20 to the euro.

The shock move, which sparked global currency turmoil and inflicted heavy losses on some banks and brokers, showed how hard it is for central banks to tame volatile markets and how easy long-accumulated credibility can be put at risk.

That carries lessons for the ECB as it contemplates one of the toughest decisions in its 16-year history.