There were also strains among Greece's partners, with some readier than others to cut a deal. 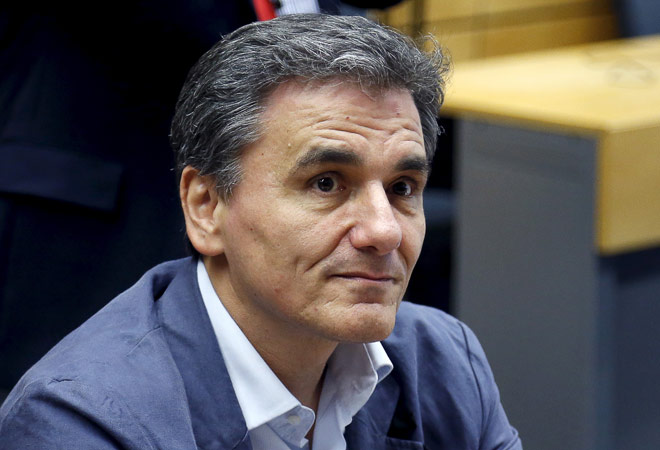 Skeptical euro zone finance ministers demanded on Saturday that Greece go beyond painful austerity measures accepted by Prime Minister Alexis Tsipras if he wants them to open negotiations on a third bailout for his bankrupt country to keep it in the euro.

The ministers postponed until Sunday a decision on whether to recommend starting talks on a new loan for Athens and sought further commitments first on product market liberalization, labor laws, privatization, state reform and more defense cuts, plus a promise to pass key laws next week, officials said.

The Eurogroup session will resume on Sunday, five hours before heads of state and government of the 19-nation currency area are to meet to decide on Greece's fate in the euro zone.

After the nine-hour session adjourned at midnight, Eurogroup chairman Jeroen Dijsselbloem told reporters the talks were very difficult and would resume at 11 a.m. (0900 GMT).

"The issue of credibility and trust was discussed and also, of course, the financial issues," he said.

Highlighting the depth of reluctance to grant another rescue to Greece after two bailouts since 2010 worth 240 billion euros, Germany's finance ministry put forward a paper demanding stronger Greek measures or a five-year "time-out" from the euro zone that looked like a disguised expulsion.

Ministers lined up to vent their anger at Tsipras on arrival at their umpteenth emergency meeting on Greece's debt crisis, with Athens staring into an economic abyss unless it wins a pledge of fresh aid before financial markets reopen on Monday.

There were also strains among Greece's partners, with some readier than others to cut a deal. One source close to the talks said Dijsselbloem decided to adjourn when discussions grew heated on what exactly Athens should be asked to do and when.

EU officials forecast a deal would be reached by the end of the weekend to keep Greece afloat, but there was consensus among the other 18 ministers that the leftist government in Athens must take further steps to convince them it would honor any new promises and repay its debts.

Tsipras won parliamentary backing early on Saturday for a tough reform package that largely mirrored measures previously demanded by international creditors but rejected by Greek voters at his behest in a referendum last Sunday.

Wolfgang Schaeuble, finance minister of top creditor Germany and a stickler for the EU's fiscal rules, said negotiations would be "exceptionally difficult". Emerging optimism about Greece had been "destroyed in an incredible way in the last few months" since Tsipras won power, he said.

Some ministers were pressing Athens to legislate as early as Monday, notably to raise the value-added tax.

The German paper, which Schaeuble presented in the meeting, demanded that Athens transfer state assets worth 50 billion euros into a trust fund to pay down debt, or take a five-year "time-out" from the euro zone during which some of its debt would be written off.

Several officials said no one explicitly raised the possibility of a Greek euro exit in the meeting.

Other ministers spoke of a fundamental lack of trust after years of broken Greek promises and six months of erratic and provocative behavior by the radical leftist Tsipras government.

Finland's state broadcaster YLE reported that the Finnish government had told parliament's influential Grand Committee on Saturday it did not consider the Greek proposal sufficient to start negotiations on a new loan. The government declined to comment. Helsinki's stance has hardened since the populist Finns Party joined a right-wing coalition that took office in May.

In Athens overnight, Tsipras had to rely on opposition votes from the right in parliament after some of his leftist lawmakers resisted spending cuts, tax rises and other measures he proposed in order to unlock 54 billion euros in three-year credit.

One Tsipras ally, Economy Minister George Stathakis, said some dissident ministers would be replaced and rebel lawmakers should resign their seats if they disagreed with the policy.

Germany, the biggest contributor to euro zone bailouts, is deeply skeptical and public opinion is hostile to any further aid for Greece, putting pressure on Chancellor Angela Merkel.

"The high figures for financing needs over the next three years may be too high and too sudden," one euro zone source said. He said officials believed Greece may need 82 billion euros, factoring in cash from the IMF and other EU sources.

Sources in the creditor institutions said Greece would need 25 billion euros just to recapitalize its shattered banks, which have been closed since capital controls were imposed on June 29 after the breakdown of previous bailout negotiations.

Stathakis told Greece's Mega TV that the capital controls, restricting cash withdrawals and bank transfers, would remain for at least another two months.

The sources said the IMF had suggested one way to make Greek debts sustainable in the medium term could be to extend the maturity on past and new loans to 60 years instead of 30.

A positive assessment of the Greek proposals delivered by the European Commission, European Central Bank and IMF late on Friday, along with bullish comments from Athens' key euro zone ally France, had raised expectations that the Eurogroup would give a green light to new loan negotiations.

But even French Finance Minister Michel Sapin, Greece's most powerful ally in the euro zone, said: "Confidence has been ruined by every Greek government over many years which have sometimes made promises without making good on them at all.

"Now we need to have confidence again."

Merkel has made clear she does not want to see a "Grexit" that could disrupt a fragile European economic recovery and undermine a supposedly irreversible union. However, she faces stiff opposition among her own conservatives.

Euro zone leaders, including Merkel and French President Francois Hollande, are due to meet on Sunday, either to endorse a decision to open talks on a new bailout or if, along with other EU leaders, to take steps to contain the fallout from a looming Greek bankruptcy.

In an ominous sign for the stability of the Greek government, 10 members on the ruling benches abstained or voted against the measures and another seven were absent, leaving Tsipras short of the 151 seats needed for a majority of his own.

MUST READ:Here's what lies ahead for crisis-hit GreeceProminent left-wingers in his Syriza party signaled before the vote that they could not support the mix of tax hikes and spending cuts proposed by Tsipras, following the rejection of similar austerity measures by voters in Sunday's referendum.

Greece asked for 53.5 billion euros ($59 billion) to help cover its debts until 2018, a review of primary budget surplus targets in the light of the sharp deterioration of its economy, and a "reprofiling" of the country's long-term debt.

Any deal would also have to be endorsed by national parliaments including in Germany, which must also formally approve the loan negotiations being started.

Vedanta likely to resume mining in Goa by October