Greece gets until Sunday for proposals to stave off collapse 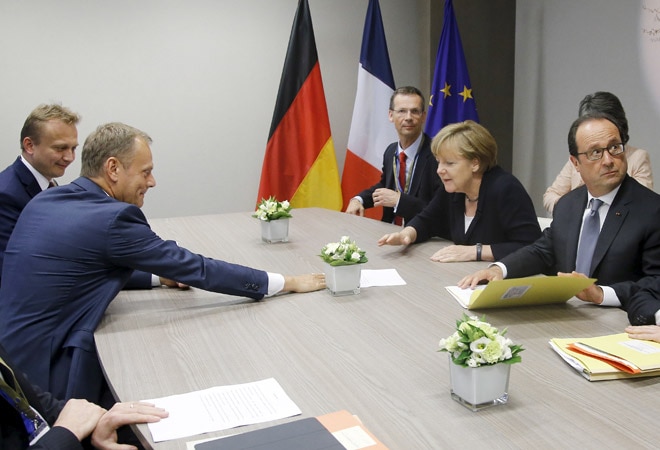 Euro zone members have given Greece until the end of the week to come up with a proposal for sweeping reforms in return for loans that will keep the country from crashing out of Europe's currency bloc and into economic ruin.

"The stark reality is that we have only five days left ... Until now I have avoided talking about deadlines, but tonight I have to say loud and clear that the final deadline ends this week," European Council President Donald Tusk told a news conference.

Prime Minister Alexis Tsipras has until Friday to present the proposal, but German Chancellor Angela Merkel said she hoped to have convincing reform commitments from Tsipras on Thursday so she could ask the German parliament to authorise negotiations on a new aid programme.

Merkel said she was "not exaggeratedly optimistic" for a solution.

At an emergency summit in Brussels on Tuesday, representatives of the 19-country euro zone said all 28 European Union leaders would meet on Sunday to decide Greece's fate. The talks were organised after Greeks voted in a referendum on Sunday against a bailout that carried stringent austerity measures.

The situation in Greece worsened with banks closed for a second week, limited cash withdrawals and businesses feeling the crunch of demands from vendors for cash payments.

Tsipras sounded upbeat as he left the summit, even though many of the reforms demanded by his partners would inflict more pain on Greeks who voted at his behest to reject the austerity measures in return for financial aid.

"The discussion took place in a positive climate," he said. "The process will be extremely fast. It starts in the coming hours, with the aim to conclude by the end of the week at the latest."

He promised to work for a socially just deal that would bring a "final exit" from the crisis, return Greece to growth and restructure Greek debt to make it viable.

Failure, Tusk warned, would undermine the EU's standing in the world and said the six-decade-old bloc may face "the most critical moment in our history".

Under a timetable agreed by the 19 leaders of the common currency area, Greece will submit on Wednesday a formal request for a two-year loan programme, with a first list of reform commitments to be spelled out in greater detail on Thursday.

If the European Commission, the International Monetary Fund and the European Central Bank approve, Eurogroup finance ministers will meet on Saturday to recommend opening negotiations on a conditional assistance programme.

He said positions had hardened since previous bailout talks collapsed in late June, when Tsipras called a referendum at short notice to defy Greece's creditors.

MUST READ:Here's what lies ahead for crisis-hit Greece
Merkel said if Athens came up with satisfactory proposals and took "prior actions" by passing laws to convince creditors of its intent, short-term financing could be made available to help Greece over a repayment hump this summer.

She did not rule out rescheduling Greek debt in the longer run by extending loan maturities, lowering interest rates and allowing a longer moratorium on debt service payments, but she said a "haircut", or writedown, was impossible because it would be illegal.

Tsipras gets last chance to save Greece today

FSSAI for fixing limits of melamine in milk, milk products