Tsipras and his ministers frequently refer to "red lines" they cannot cross without betraying their electoral mandate, including cutting wages and pensions, abandoning collective bargaining rights or making it easier to lay off workers. 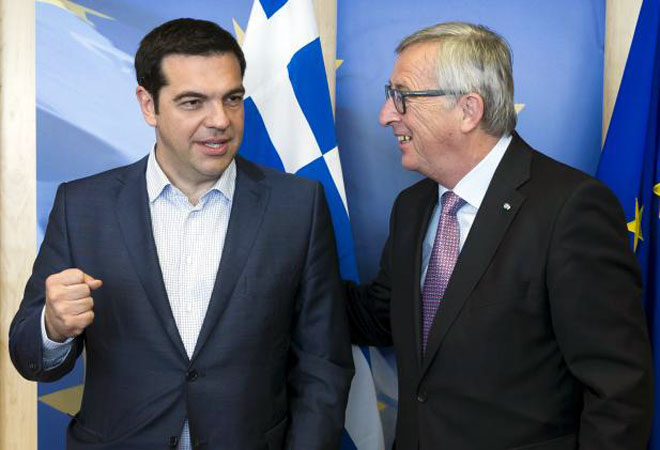 After five months in power, Greek Prime Minister Alexis Tsipras has 48 hours to make a decision that will shape his country's future for decades, yet his negotiating partners cannot be sure which way he will jump.

The 40-year-old leftist, elected in January on a promise to end austerity, must decide whether to swallow an unpalatable deal with international creditors to avert a default next week at the risk of losing part of his Syriza party, or refuse and risk economic chaos and ejection from the euro zone.

European Union leaders made crystal clear to Tsipras at a summit on Thursday evening that their patience is exhausted and Greece will be given a "take it or leave it" choice at a finance ministers' meeting on Saturday.

If it rejects the cash-for-reforms proposal put together by the European Commission, the European Central Bank and the International Monetary Fund, the Eurogroup will turn to "Plan B", preparing to cope with the fallout from a Greek default and limit the damage from ensuing financial turmoil.

Yet the firebrand premier remains an enigma to Commission President Jean-Claude Juncker, German Chancellor Angela Merkel and French President Francois Hollande, who have spent many hours talking with him in person and on the telephone since February, according to people familiar with the conversations.

"Is he a pragmatic politician or an ideologue? Is he in charge or under the control of his Syriza party? Even after all these weeks, we don't really know," said an EU official who has been involved in the talks.

There are many other unknowns, including whether Tsipras cares more about getting rid of international controls on Greece than about keeping his country solvent, and whether he thinks being in default would strengthen Greece's bargaining position rather than weakening it.

Tsipras and his ministers frequently refer to "red lines" they cannot cross without betraying their electoral mandate, including cutting wages and pensions, abandoning collective bargaining rights or making it easier to lay off workers.

Juncker, who built a good personal rapport with Tsipras when both were leading candidates in last year's European Parliament election, thought he had coaxed the Greek leader most of the way to a deal at a meeting in Brussels on June 3.

As the veteran Luxembourger tells it, Tsipras promised to send him alternative proposals on the few outstanding issues the following day, and to return to Brussels to wrap up a deal.

Instead, he ran into a backlash from Syriza activists back home, scrapped the trip to Brussels and went to parliament to denounce the creditors' plan as cruel and "absurd".

The normally jovial Juncker refused to take a telephone call from Tsipras after that and all but accused him of duplicity.

Merkel and Hollande had a long series of telephone calls to try to bring the Greek leader back on board.

"He was always looking for dialogue," a French source familiar with Hollande's thinking said of Tsipras. "He never locked himself in rejection. He always thought it could be settled politically and not by technocrats. But the Commission doesn't talk politics much, and the IMF and ECB even less so."

After a rocky start with Tsipras, who went out of his way to assail Germany and demand reparations for the World War Two occupation of Greece, Merkel too came to regard him as an intelligent man with whom she could do business.

Yet Tsipras' erratic negotiating tactics this week have again raised the question of whether he would be willing to defy many in his party and whether he has a strategy to get a deal through parliament and avoid a default.

Ministers and lawmakers from Syriza go on television daily to denounce the creditors as trying to annihilate the Greek people and cast them deeper into poverty and recession.

Tsipras delayed sending Greece's counter-proposals for a deal until it was too late for the bailout monitors to assess them in detail before a euro zone finance ministers' meeting on Monday. He then insisted Athens had gone as far as it could.

In five hours of talks with Juncker, ECB President Mario Draghi, IMF chief Christine Lagarde and the heads of the Eurogroup of finance ministers and the euro zone rescue fund on Wednesday, Tsipras appeared to be moving closer to an accord.

"Then he went out of the room to talk to his delegation in an adjoining room and came back after a while saying everything was unacceptable," said a person familiar with the meeting.

Those aides included Finance Minister Yanis Varoufakis, an outspoken self-declared "erratic Marxist" economics professor, State Minister Nikos Pappas, Tsipras's right-hand man, and some of the Syriza economists who have been conducting the talks.

Euro zone leaders were relieved in late April when Tsipras shook up his negotiating team, sidelining Varoufakis, who had infuriated his euro zone peers with what they regarded as ideological lectures.

Once Tsipras had made getting a deal what Germans call a "Chefsache" (leader's matter), they hoped the Greeks would stop barring bailout monitors from government buildings or having access to the public accounts. Cooperation improved only slightly.

A European diplomat familiar with high-level conversations said the difference between the prime minister and Varoufakis was one of style rather than substance.

"Difference is a myth they nurture," he said.

Now some senior European officials wonder whether it will take a further escalation of the crisis such as a default on an IMF repayment due on Tuesday for Tsipras to accept a deal.

"Maybe Tsipras really needs this shock after June 30," the diplomat said. "But we hope that he gets reasonable before."

European diplomats who have observed the Greek leader expect him to move only at "one minute to midnight". If he moves.