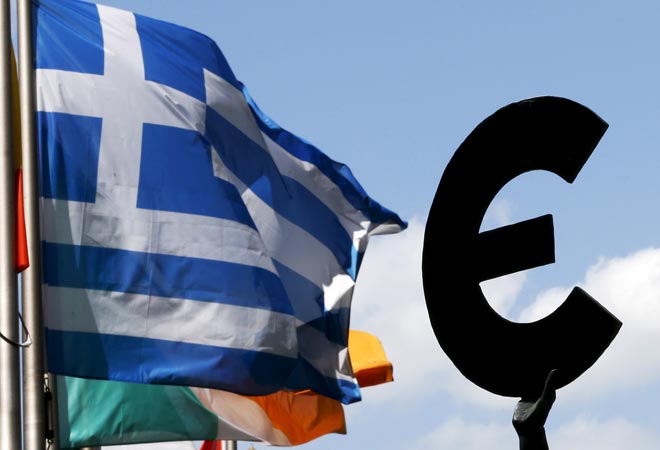 A Greek flag flies past a statue depicting the European unity outside the European Parliament ahead of a euro zone leaders summit on Greece in Brussels, Belgium, July 6, 2015. (Photo: Reuters)

Greece faces a last chance to stay in the euro zone on Tuesday when Prime Minister Alexis Tsipras puts proposals to an emergency euro zone summit after Greek voters resoundingly rejected the austerity terms of a defunct bailout.

With Greek banks rapidly running out of cash and the European Central Bank slowly tightening the noose on their funding, Tsipras must persuade the bloc's other 18 leaders, many of whom are exasperated after five years of Greek crisis, to open rapid negotiations for a major new loan to rescue his country.

The leaders of Germany and France, the currency area's two main powers, said after conferring on Monday that the door was still open to a deal to save Greece from plunging into economic turmoil and ditching the euro.

But Chancellor Angela Merkel, facing rising pressure in Germany to cut Greece loose, made clear it was up to Tsipras to come up with convincing proposals after Athens spurned the tax rises, spending cuts and pension and labour reforms that were on the table before its bailout expired last week.

From the Greek side, the key to making any deal politically acceptable will be to win a stronger commitment from Merkel and other lenders to reschedule Greece's giant debt burden, which the International Monetary Fund says is unsustainable.

Without some firmer pledge of debt relief, neither Greece nor the IMF are likely to accept a deal. But that may be more than Germany and its northern allies can swallow.

"The door is open to negotiations, but there isn't much time left and the situation is urgent both for Greece and for Europe," French President Francois Hollande said in a joint media appearance with Merkel in Paris.

At stake at the emergency summit beginning at 6 pm (1600 GMT) in Brussels is more than just the future of Greece, a nation of 11 million that makes up just 2 per cent of the euro zone's economic output and population.

If Greek banks run out of money and the country has to print its own currency, it could lead to a state leaving the euro for the first time since it was launched in 1999, creating a precedent and raising doubts about the long-term viability of an incomplete European monetary union.

"Even if it did not trigger a short-term domino effect, the integrity of the euro zone would come under fresh threat with each episode of political uncertainty within member countries," said Thibault Mercier, an analyst at BNP Paribas.

Strengthened by the overwhelming 61.3 per cent 'No' vote in Sunday's referendum, the leftist Tsipras won the unprecedented support of all other Greek party leaders on Monday and replaced his abrasive Finance Minister Yanis Varoufakis with the soft-spoken negotiator Euclid Tsakalotos.

In an intensive round of telephone diplomacy, he called the heads of the ECB, the IMF and the European Commission, as well as Merkel and Russian President Vladimir Putin.