In the letter, seen by Reuters, Greek PM Alexis Tsipras asked to keep a discount on value added tax for Greek islands, stretch out defence spending cuts and delay the phasing out of an income supplement to poorer pensioners. 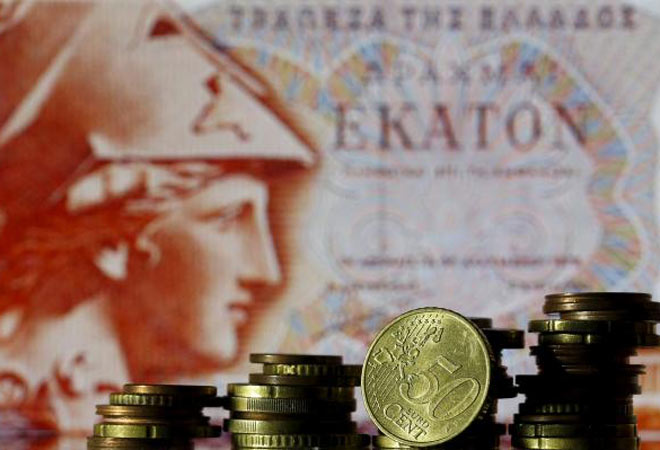 Euro coins are seen in front of a displayed of Head of Athena on 100 Drachma old Greece banknote in this photo illustration taken in Zenica, Bosnia and Herzegovina, June 30, 2015. Photo: Reuters

Greek Prime Minister Alexis Tsipras has written to international creditors saying Greece could accept their last bailout offer if some conditions were changed, but Germany expressed scepticism while saying the door was still open for negotiations.

In exchange, Athens asked for a 29 billion euro loan to cover all its debt service payments due in the next two years.

In the letter, seen by Reuters, Tsipras asked to keep a discount on value added tax for Greek islands, stretch out defence spending cuts and delay the phasing out of an income supplement to poorer pensioners.

"As you will note, our amendments are concrete and they fully respect the robustness and credibility of the design of the overall programme," the leftist Greek leader wrote.

Euro zone finance ministers were due to discuss the Greek request on a conference call at 1530 GMT, but the initial reaction from ministers and senior officials was that the letter contained elements that ministers would find hard to accept.

German Chancellor Angela Merkel said Greece had not fulfilled its obligations but the door for negotiations remained open.

With long queues forming at bank machines a day after Greece became the first advanced economy to default on the IMF, and signs that supplies of bank notes were running low, Tsipras has been under growing political pressure to reach a deal.

Although his letter was dated June 30, it arrived after the 19 Eurogroup ministers had ended a conference call on Tuesday evening.

An EU official said it had been received around midnight, when the country's international bailout expired when it defaulted on an IMF repayment.

"The Hellenic Republic is prepared to accept this Staff Level Agreement subject to the following amendments, additions or clarifications, as part of an extension of the expiring EFSF programme and the new ESM Loan Agreement for which a request was submitted today," Tsipras wrote.

However German Finance Minister Wolfgang Schaeuble poured cold water on hopes of a rapid breakthrough, saying the letter had come too late and it was still not clear what Greece wanted.

"That did not provide further clarity," he said, adding that there was "no basis" for serious negotiations with Athens at the moment.

Any talks on a new programme would have to start from scratch with different conditions, he told a news conference in Berlin.

With events moving quickly, it was unclear whether a referendum on the bailout terms, planned for Sunday, would still go ahead after Finance Minister Yanis Varoufakis indicated on Tuesday that it might be scrapped if a deal could be reached.

On the third day since banks were shut, long queues formed at bank machines to take out cash, but even at a withdrawal limit of 60 euros a day. Bankers said there were already signs that 50-euro and 20-euro bank notes were running low.

Around 1,000 banks around the country also opened to allow pensioners to withdraw a limited sums, a move made necessary by the fact that many older people in Greece do not have credit or debit cards.

Kiki Rizopoulou, a 79 year-old pensioner from Lamia in central Greece had to travel to Athens to collect her pension, spending 20 euros of the 120 euros she was allowed to take out.

"I already have to pay back 50 euros that I owe. It's embarrassing," she said.
Advertising signs from the ruling Syriza party supporting the "No" appeared in Athens but the hardship facing pensioners added to the pressure facing Tsipras, who has indicated he will resign if he loses the referendum.

The Tsipras letter contained only a single sketchy reference to labour market reform, which was one of the creditors' key demands to make the Greek economy more competitive.

"The new framework will be legislated in autumn 2015," it said without saying what measures it contained. Tsipras' leftist government wants to restore collective bargaining rights scrapped under previous bailout-driven reforms, and opposes a demand to make collective layoffs easier in the private sector.

Tsipras did agree to implement immediately a range of measures recommended by the Organisation for Economic Cooperation and Development to make it easier to do business and open up closed business sectors.

The letter made no mention of privatisations, which the Tsipras government halted on taking office and which remain a bone of contention.

An opinion poll showed opposition to the bailout in the lead but also that the gap had narrowed significantly as the impact of the government's move to shut the banks and impose capital controls began to bite.

European financial markets have remained remarkably calm this week in the light of Greece's upcoming referendum, IMF default and heightened concerns about Athens sliding out the euro.

The euro currency has barely moved. After a rocky start to the week, euro blue chip stocks are down less 2 percent since Friday. And, crucially, government borrowing costs in the other highly indebted southern euro nations of Portugal, Spain and Italy rose only modest and briefly and remain roughly where they were a month ago.

The lack of panic or contagion to other euro markets stands in marked contrast to 2011, when the Greek crisis was perceived as a threat to the future of the single currency.

And this lack of overspill has emboldened the more hawkish of Greece's sovereign creditors, including those in Berlin, who insist Greece had been effectively ringfenced by a host of financial buffers and its fate would not undermine the integrity of the euro in the same way it did four years ago.

"Even if Greece were to leave the eurozone, its economy represents only a small percentage of the eurozone's gross domestic product, less than 2 percent, and a lot of firewalls have been built in Europe to try to minimise contagion among other euro area countries," said David Zahn, head of European Fixed Income at U.S. asset manager Franklin Templeton.

French Finance Minister Michel Sapin, who has been Greece's strongest sympathiser in the euro zone, told RTL radio: "The aim is to find an agreement before the referendum if possible... But it's dreadfully complicated."

The ECB's policymaking governing council was to meet in Frankfurt to decide whether to maintain, increase or curtail emergency lending that is keeping Greek banks afloat despite a wave of deposit withdrawals and the state's default.

Germany's Bundesbank was leading hawks who argue that the ECB cannot go on providing funds through the Greek central bank as before to lenders that are backed by an insolvent sovereign.

One possible move would be to increase the "haircut" charged on Greek government bonds presented as collateral for funds in light of the IMF default.

Schaeuble, who has taken a hard line on Greece, took the unusual step of telling lawmakers he would advise the ECB not to raise liquidity to Greek banks, according to participants at a closed-door meeting. Berlin normally insists the central bank is independent and should not receive advice from politicians.

After Athens's peers rejected a last-ditch plea for an extension of its expiring bailout programme on Tuesday evening, Eurogroup chairman Jeroen Dijsselbloem said Greece was welcome to ask for new aid but it would come with conditions.

"What can change is the political stance of the Greek government that has led to this unfortunate situation," Dijsselbloem told Reuters.

Thousands of pro-European Greeks took to Athens' central Syntagma Square outside parliament on Tuesday evening to demand a "yes" vote to the bailout deal.

Carrying signs with messages like "We will not become the last Soviet state" and chanting "Greece! Europe! Democracy!", the demonstrators braved heavy rain to rally in support of a "Yes" vote.

The demonstration matched a rally of similar size for the "No" camp a day earlier, as supporters of both sides sought to build up momentum before Sunday's referendum.

A poll by the ProRata institute published in the Efimerida ton Syntakton newspaper showed 54 percent of those planning to vote would oppose the bailout against 33 percent in favour.

However a breakdown of results between those polled before and after Sunday's decision to close the banks and impose capital controls showed the gap narrowing.

Of those polled before the announcement of the bank closures, 57 percent said they would vote "No" against 30 percent who would vote "Yes". However among those polled after, the "No" camp fell to 46 percent against 37 percent for "Yes".

Why IMD forecasts are watched with bated breath