The package was approved with 229 votes in the 300-seat chamber. A total of 38 members of ruling Syriza party deserted Prime Minister Alexis Tsipras and branded the austerity measures as "social genocide". 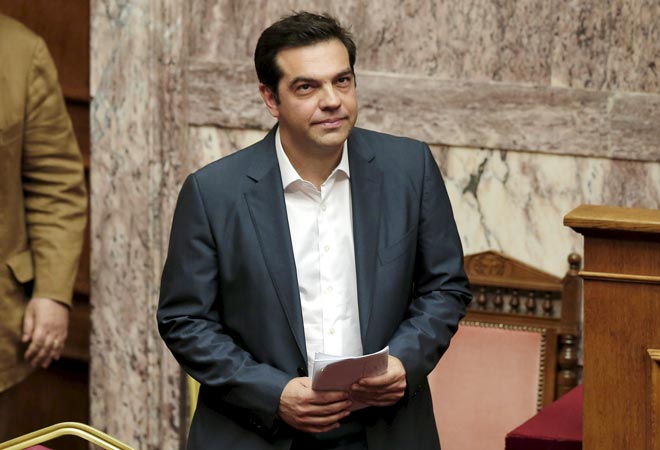 The Greek parliament passed sweeping austerity measures demanded by lenders to open talks on a new multi-billion-euro bailout package to keep Greece in the euro, but dozens of hardliners in the ruling Syriza party deserted Prime Minister Alexis Tsipras.

The package was approved with 229 votes in the 300-seat chamber. There were 64 votes against it and six abstentions. But Tsipras required the support of pro-European opposition parties to push the measure through, leaving a question over the future of his government.

Tsipras said there was no alternative to the package, which he acknowledged would cause hardship, but he stood by the decision. "I am the last person to shirk this responsibility," he said.

In exchange for funding worth up to 86 billion euros, Greece has accepted reforms including significant pension adjustments, increases to value added tax, an overhaul of its collective bargaining system, measures to liberalise its economy and tight limits on public spending.

It has also agreed to sequester 50 billion euros of public assets in a special privatisation fund to act as collateral on the deal.

The measures were branded "social genocide" by the firebrand speaker of parliament Zoe Constantopoulou, one of 38 Syriza lawmakers to oppose the package, and there were violent clashes between protesters and police outside parliament as the debate went on before the vote.

MUST READ:Here's what lies ahead for crisis-hit Greece

Among the Syriza rebels was former Finance Minister Yanis Varoufakis, who was sacked by Tsipras last week and who denounced the bailout deal as "a new Versailles Treaty" - the agreement that demanded unaffordable reparations from Germany after its defeat in World War One.

Amid speculation that both ministers could lose their jobs in a reshuffle, possibly as early as Thursday, Lafazanis said he remained loyal to the government but was ready to offer his resignation, joining Deputy Finance Minister Nadia Valavani, who stepped down earlier on Wednesday.

"We support Syriza in government and we support the Prime Minister. We don't support the bailout," he said after the vote.

Elected in January on an anti-austerity platform, Tsipras made an about-turn following gruelling all-night negotiations in Brussels on Monday, giving in to lenders' demands for immediate reforms to prevent a chaotic exit from the single currency.

Speaking in parliament before the vote, Tsipras made clear he was supporting the package against his will but there was no alternative if Greece was to avoid financial collapse.

"I acknowledge the fiscal measures are harsh, that they won't benefit the Greek economy, but I'm forced to accept them," he said as he made a final appeal for support.

With Greek parliamentary approval secured, the way has been cleared for other national parliaments to approve the start of bailout talks and for the release of funding to allow Greek banks to re-open, more than two weeks after capital controls were imposed to prevent them from collapsing.

Eurozone finance ministers are due to hold a conference call on Thursday at 10 am to discuss the vote.

With Greece facing an urgent deadline on July 20, when a 3.5 billion euro payment to the European Central Bank is due, EU officials raced to agree a bridge financing accord that would enable Athens to avoid defaulting on the loan.

Despite strong objections from Britain and the Czech Republic - EU countries that do not use the euro - a 7 billion euro loan is expected to be extended to Greece from the European Financial Stability Mechanism (EFSM), an EU-wide fund not intended for euro zone funding needs.

Given the hurdles facing the agreement, doubts have surfaced about how long it could hold together, with one senior European Union official saying it had a "20-, maybe 30-percent chance of success".

After its deepest crisis since World War Two, the Greek economy has lost more than a quarter of its output and more than one in four of its workforce is unemployed. It is unclear how it can sustain the burden of one of the most far-reaching austerity programmes ever imposed on a euro zone country.

A study by the International Monetary Fund (IMF)issued on Tuesday called for much more debt relief than Greece's euro zone creditors, particularly Germany, have been prepared to accept so far.

Berlin, which along with the other creditors knew about the IMF study before agreeing to new bailout talks, may wince at providing huge debt relief to a country it scarcely trusts to honour its promises.

But Germany insists on having the IMF in the negotiations to help keep Greece in line. It may countenance extending repayment periods for Greek debt but has said it will not accept a writedown, with the finance ministry insisting it could not accept "a debt haircut via the backdoor".

The European Commission published its own assessment of Greece's debt burden on Wednesday that also offered the prospect of debt relief. While ruling out any write-offs, the Commission said debt reprofiling was possible, as long as Greece implemented the reforms to which it has agreed.

Washington has stepped up pressure for a deal between the euro zone and NATO member Greece. US Treasury Secretary Jack Lew is making a short-notice trip to Frankfurt, Berlin and Paris this week to press for a quick agreement.

Although the bailout package is much tougher than the Greek people could have imagined when they resoundingly rejected a previous offer from the creditors in a referendum on July 5, most want to keep the euro.

With banks shut and the threat of a calamitous exit from the currency bloc hovering over the country if it cannot conclude a deal, many Greeks see the package as the lesser of two evils.

"We are Europe's bankrupt child and as a child, Europe has been supporting us for five years and told us what we needed to do to get out of this situation," said Yannis Theodosis, a 35-year-old civil engineer. "We did nothing and now we are paying the consequences."

Civil servants held a strike on Wednesday, as did pharmacists, whose industry would be opened up under the reform package, in demonstrations that passed peacefully until a small group threw petrol bombs at police, who responded with tear gas and flash bombs.

Calm later returned but nearby streets were empty and garbage bins were still burning. About 30 people were detained, according to a police source.