In drafting the new laws, which could see the setting up of Chinese government intelligence agencies in the global financial centre, Beijing plans to circumvent Hong Kong's lawmaking body, the Legislative Council 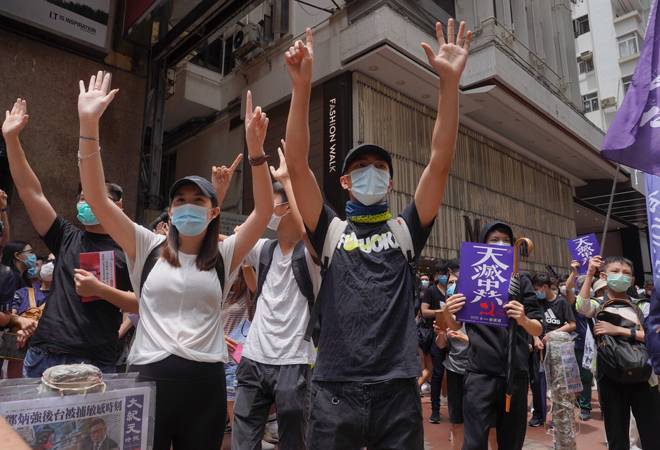 Hong Kong braced on Sunday for its first protests since Beijing's controversial plan to directly impose national security laws on the city, in what could provide a litmus test of public opposition to China's tightening grip over the financial hub.

Beijing on Thursday proposed tough security legislation for Hong Kong, a move that sent a chill through financial markets and drew a swift rebuke from foreign governments, international human rights groups and some business lobbies.

In drafting the new laws, which could see the setting up of Chinese government intelligence agencies in the global financial centre, Beijing plans to circumvent Hong Kong's lawmaking body, the Legislative Council.

The move has sparked concerns over the fate of the "one country, two systems" formula that has governed Hong Kong since its return to Chinese rule in 1997 and which guarantees the city broad freedoms not seen on the mainland.

Some local commentators have described the proposal as "a nuclear option" that is part of Chinese President Xi Jinping's high-stakes power play.

A backlash intensified on Saturday as nearly 200 political figures from around the world said in a statement the proposed laws said the proposed laws are a "comprehensive assault on the city's autonomy, rule of law and fundamental freedoms".

China has dismissed other countries' complaints as "meddling" and rejected concerns the proposed laws would harm foreign investors.

On Saturday, local Hong Kong media reported police were seen entering Beijing's main representative bureau in the city, the Liaison Office, ahead of protests expected to start later in the bustling shopping district of Causeway Bay.

The rally was initially organised against a controversial national anthem bill, which is due for a second reading at the Legislative Council on Wednesday. The proposed national security laws sparked calls for more people to take to the streets.

Hong Kong has increasingly become a pawn in deteriorating relations between Washington and Beijing, and observers will be watching for any signs of resignation to defeat among the broader local community or indications that activists are gearing up for a fresh challenge.

Anti-government protests that escalated in June last year plunged the city into its biggest political crisis in decades, battered the economy and posed the gravest popular challenge to President Xi since he came to power in 2012.

The sometimes violent clashes that roiled the city saw a relative lull in recent months as the government imposed measures to curb the spread of coronavirus.

Coronavirus impact: Legislation tabled in US Congress to give Green Cards to immigrant nurses, doctors