"It is a victory for the WTO and for the global community to have arrived at a mature decison," India's Commerce and Industry minister said. "We are more than happy. It is a great day. It is a historic day." 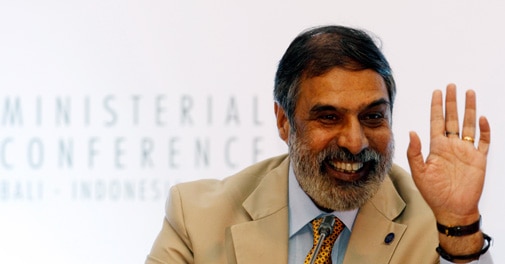 Commerce and Industry Minister Anand Sharma has said he would endorse a draft trade reform at the World Trade Organization (WTO), removing a major obstacle to a deal.

"It is a victory for the WTO and for the global community to have arrived at a mature decison," Sharma told reporters. "We are more than happy. It is a great day. It is a historic day."

The first global trade reform since the creation of WTO was taken up for agreement by ministers from the body's 159 member countries.

WTO Director-General Roberto Azevedo had drafted a text that aims to slash red tape at customs around the world, give improved terms of trade to the poorest countries, and allow developing countries to skirt the normal rules on farm subsidies if they are trying to feed the poor.

It would also revive confidence in the WTO's ability to negotiate global trade deals, after a string of failures that left the body at risk of sliding into irrelevance.

Just a day earlier, a deal that would add hundreds of billions of dollars to the world economy by some estimates teetered on the brink of collapse.

In an organization based on consensus among all of its members, attention focused squarely on India as the main stumbling block to the WTO's first global trade deal in two decades.

India had insisted it would not compromise on a policy of subsidising food for hundreds of millions of poor, putting it at odds with the United States and other developed countries.

Azevedo, a former Brazilian trade negotiator, told delegates at the start of the last day of talks that there was more work to be done, but sounded upbeat on prospects for success.

"He told members they were now very close to something that has eluded us for many years and that the decisions over the next few hours would have great significance beyond this day," the spokesman said.

It is 12 years since the WTO launched the Doha Round, which failed to yield concrete results, and many experts had warned that failure in Bali would leave regional and bilateral trade arrangements as the only avenue for trade reform, dividing the world and reversing the globalising goal of the WTO.

A Bali trade deal, which is far less ambitious than the Doha Round had aimed for up until two years ago, would open the way to much wider trade reforms and enable the body to modernise its rules for the internet era.

The "all or nothing" agreement covers several areas, the largest of which is trade facilitation - a global standardisation and simplification of customs procedures that would tear down barriers to cross-border movement of goods.