India and Russia today sealed a number of big ticket defence deals including purchase of missile systems, frigates and joint production of helicopters besides deciding to deepen cooperation in a range of crucial sectors even as the two close allies resolved to fight the menace of terrorism unitedly. 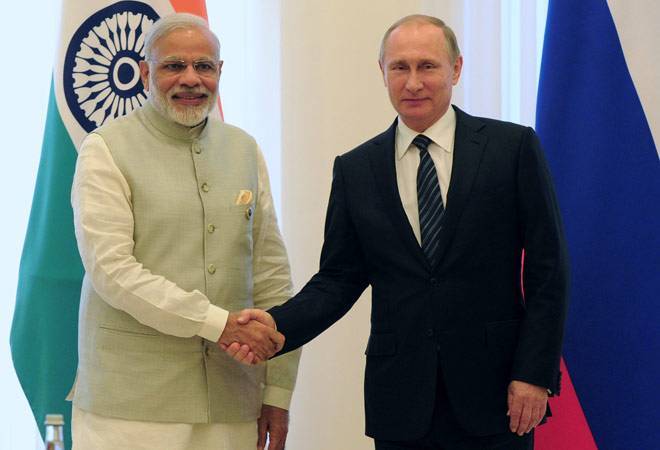 India and Russia today sealed a number of big ticket defence deals including purchase of missile systems, frigates and joint production of helicopters besides deciding to deepen cooperation in a range of crucial sectors even as the two close allies resolved to fight the menace of terrorism unitedly.

The two leaders also dedicated the unit two of Kudankulum nuclear power plant and witnessed foundation laying of its Unit 3 and 4.

The defence deals included India buying the 'gamechanger' S-400 Triumf air defence systems from Russia at a cost of over USD 5 billion. The two countries will also collaborate in making four state of art frigates besides setting up a joint production facility for making Kamov helicopters.

Reading out a statement to the media in the presence of Putin, the Prime Minister appreciated Russia's understanding and support of India's actions to fight cross-border terrorism, an oblique reference to India's surgical strike across the LoC targeting terror launch pads.

"Russia's clear stand on the need to combat terrorism mirrors our own. We deeply appreciate Russia's understanding and support of our actions to fight cross-border terrorism, that threatens our entire region.

"We both affirmed the need for zero tolerance in dealing with terrorists and their supporters," Modi said.

Putin, on his part, said both countries have close cooperation in fighting terrorism.

Modi said the "highly productive" outcomes of the meeting clearly establish the special and privileged nature of strategic partnership between the two countries.

"They also lay the foundations for deeper defence and economic ties in years ahead. The agreements on manufacturing of Kamov 226T helicopters; constructions of frigates; and acquisition and building of other defence platforms are in synergy with India's technology and security priorities," he said.

The two sides signed an Inter Governmental Agreement for the purchase of S-400 'Triumf' long-range air defence missile system which has the capability to destroy incoming hostile aircraft, missiles and even drones at ranges of up to 400 km.

Modi said they have agreed to work on an annual military industrial conference that will allow stakeholders on both sides to institute and push collaboration.

"These projects are new chapters in a long history of strong and diverse defence partnership that both sides can take much pride in," he said.

He said, "We are working to model a partnership that befits our common ambition and meets our shared goals for the twenty-first (21st) century.

"Our close friendship has given clear direction, fresh impulse, stronger momentum and rich content to our ties.In the emerging regional and global landscape, it has been a source of strength and substance, a driver of peace and a factor of stability."

On cooperation in atomic sector, he said the dedication of Kudankulum 2 and laying of foundation concrete of Kundankulum 3 and 4 were examples of tangible results of India-Russia cooperation in the field.

"And, with proposed construction of another eight reactors, our wide ranging cooperation in nuclear energy is set to bring rich dividends for both of us. It also fits in with our needs of energy security, access to high technology and greater localization and manufacturing in India," said the Prime Minister.

"And, with President Putin's support, we are ready and willing to expand the scope of our engagement further. We are also undertaking a joint study of a gas pipeline route between our two countries.

"A combination of robust civil nuclear cooperation, LNG sourcing, partnership in the Oil and Gas sector, and engagement in renewables can construct a promising 'Energy Bridge' between our two countries," he said.

The Prime Minister said the two countries also agreed to set up a Science and Technology Commission.

"Through this our societies will reap the benefits of joint development, transfer and sharing of cutting edge technologies in different fields," he said.

"Businesses and industry between our two countries are connected more deeply today. Trade and investment ties are on the upswing.

The Prime Minister said success of the Summit "shines a spotlight on the abiding strength of India-Russia strategic partnership.

"It also highlights our strong convergence of views and positions on pressing international and regional issues," he said.

Modi said both he and Putin noted the similarity of views on the situation in Afghanistan and turmoil in West Asia.

"We also agreed to work closely to respond to the challenges posed by the unsettled nature of the global economic and financial markets. Our close collaboration at the United Nations, BRICS, East Asia Summit, G-20 and Shanghai Cooperation Organization makes our partnership truly global, both in its scope and coverage," he said.

Russia keen to invest in India for making defence aircraft