As the friends and families of the passengers and international media rue the fact that there has been very little flow of information from the Malaysian authorities, tourism officials in Mumbai were matter of fact about the incident. 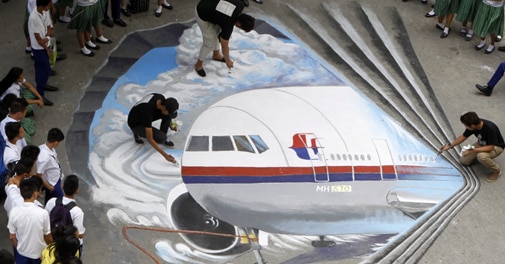 Students watch as a group of artists put the finishing touches to a three dimensional artwork, based on the missing Malaysia Airlines flight MH370, that was painted on a school ground in Makati city, metro Manila March 17, 2014. Reuters

Even as 26 nations intensfiy search over a vast area spanning at least 2.24 million square nautical miles to find the missing Malaysian Airline flight MH370, there is still no trace of the Beijing bound jetliner, a Boeing 777, after 12 days. Malaysian tourism board officials on a ten-day sales mission to India downplayed the incident that has captured international attention.

As the friends and families of the passengers and international media rue the fact that there has been very little flow of information from the Malaysian authorities, the tourism officials in Mumbai were matter of fact about the incident.

"Search is still on. Nobody can say exactly where the plane is. Planes are still flying. It does not mean that everything should come to a standstill," said Taiyab.

Investigating agencies are not ruling out a hijack, more so with two Iranian passengers travelling on the flight with stolen passports. However, Malaysian officials dismissed it as a global occurrence and denied that there was a security lapse on part of the Malaysian airport authorities.

"It is not an unusual practice (travelling on stolen passports). People tamper with passports and change their photos for whatever reasons. This has happened at many places before and it is unfortunate that it has happened now," Taiyab said, allaying fears that the entire episode has sullied the reputation of the Malaysian Airlines. "We will plug any loopholes that are there in our immigration system," he added.

Malaysia's Consul General Mohamed Hatimi Abas said the MH 370 disappearance is a lesson for the authorities and the authorities are hoping that the plane has not gone down. The Malaysian Minister of Tourism and Culture Dato Seri Mohamed Nazri Abdul Aziz called off his meeting with the Indian media fuelling speculation that he did not want to face questions from the press with the issue still remaining unresolved.

There are five Indian passengers on board MH 370.

The year 2014 has been declared as the 'Visit Malaysia Year' and the incident has come at a most inopportune time for the Malaysian Tourism Board's efforts to boost tourism and trade with partner countries.

India is an important market for Malaysia. A total of 650,989 Indian travelers visited Malaysia in 2013, according to the information made available by the Malaysian Tourism Board, making it the sixth top tourist generating market to the country.

'Indian corporate leaders tend to lean to the dark side'