It was a fleeting moment once the camera had gone off, but some say it's indicative of the leadership style Satya Nadella brings to his new job as CEO of Microsoft Corp. 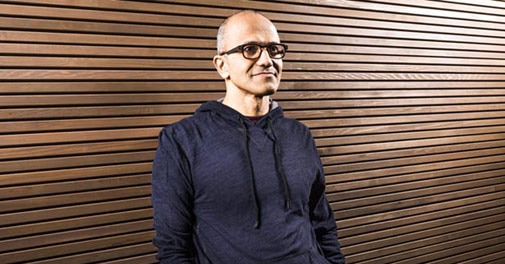 It was a fleeting moment once the camera had gone off, but some say it's indicative of the leadership style Satya Nadella brings to his new job as CEO of Microsoft Corp.

Nadella's impromptu town hall webcast had interrupted business meetings between Microsoft employees and outside partners at the company's Executive Briefing Center in Redmond, Wash. Hours earlier, he had been named only the third leader in company history. When the brief webcast was over, he didn't want to hog the limelight.

"If you have to get back to (a meeting) because it's more interesting or important, please...," Nadella said as the town hall transitioned into a light reception.

The gesture is just one example of Nadella's calming, collegial style, which stands in stark contrast to the blustery, passionate, rally-the-troops approach employed by Microsoft's previous CEO, Steve Ballmer.

Experts on leadership say the change in tone is a necessary cultural shift for a mature company transitioning into new businesses while letting go of past successes and missed opportunities.

"It's very symbolic," says Suresh Kotha, a professor at the University of Washington's Foster School of Business in Seattle. "I think that sends a very strong message, that work is important."

Ballmer is known for his larger-than-life displays of emotion. At his farewell address to Microsoft employees in September, he high-fived and hugged audience members, pumped his fists in the air, and even shed tears as the popular 1987 song "(I've Had) The Time of My Life" played on the sound system. In a video of the event widely viewed on YouTube, he screams: "You work for the greatest company in the world!"

Observers still remember Ballmer's intense competitiveness. At a 2009 company meeting at Seattle's Safeco field, he pretended to stomp on an iPhone he snatched from a Microsoft employee. During a public Q&A in 2012, he slammed Google's Android mobile operating system as "wild" and "uncontrolled."

Compare that to Nadella's comments at a financial analysts meeting in September, where he described how Microsoft's mobile device management software has to handle devices that run on Apple's iOS, Google's Android and Microsoft's Windows equally: "Enterprises are heterogeneous, and we recognized that," he said.

Richard Metheny, a management coach for executive search firm Witt/Kieffer, latched onto comments Nadella made in introducing himself as CEO, about how he buys more books and signs up for more online courses than he could possibly finish.

"It means he's open to ideas, open to others," Metheny says. "Perhaps he'll have the ability to get Microsoft to loosen up a little and focus on innovation rather than be accused of bringing in a solution that brings in money immediately."

One problem Microsoft faces is its legacy of competing internal fiefdoms, says Douglas McKenna, a management consultant who advised Microsoft from 1985 to 1993 and worked at the company from 1993 through 2001.

Founder Bill Gates and Ballmer believed the clash of ideas resulted in the best rising above the rest, McKenna says. That style of management, coupled with a so-called stack ranking system that graded employees on a bell curve, resulted in a company full of "competitive people who learned that climbing over each other and battling across divisions is the way to get ahead," McKenna says.

Breaking down those barriers will be important for Microsoft at a time when software and services are expected to work across many platforms and devices, McKenna says. It's a task that could benefit from Nadella's collaborative approach.

"You have to have people who are willing to release their convictions and try something new," McKenna says.

The company has already begun the shift - with a reorganization launched in July that Ballmer called "One Microsoft." And in November, the company eliminated the bell-curve performance review system that rewarded workers for outdoing their peers. It was an acknowledgement that the tactics that helped Microsoft grow into one of the world's most dominant software companies isn't working anymore.

What's often required of companies that have hit their peak is a leader who is analytical - rather than driving and expressive as Ballmer was - especially when trends point downward, says William Klepper, a professor of management at Columbia Business School.

Microsoft's stock price peaked in 1999 and the wave of success the company rode on the back of its Windows operating system for personal computers is ending, he says.

"What they need to do is start their `second wave' thinking," Klepper says. "That takes patience, due diligence and a deep dive to do that kind of thing. That is very much in the style of both Nadella and Gates."

Nadella has already indicated that innovation will be key for Microsoft, and in another collaborative turn, he asked Gates to increase his time at the company to help plot future strategy, to which Gates agreed. Nadella has said repeatedly since being named CEO that the technology industry "doesn't respect tradition."

And he has been lauded by many people - including Ballmer - for having the ability to pick a strategy that makes sense.

Riverbed Technology CEO Jerry Kennelly, who persuaded Nadella to join his computer networking company's board last March, credits Nadella with preventing the company from "taking a wrong turn." As management was considering moving in a new direction, Nadella delivered hard-edged advice "in a way that is constructive and collaborative," Kennelly says.

"At the end of the day, technology is all about having the right product at the right time in the right market," Kennelly says. "The keys to the kingdom are your product strategy and your market strategy, and that is where Satya has been helpful for us."