After summit talks with the US President, PM Narendra Modi said both sides were serious about resolving issues blocking the civil nuclear deal at the earliest. 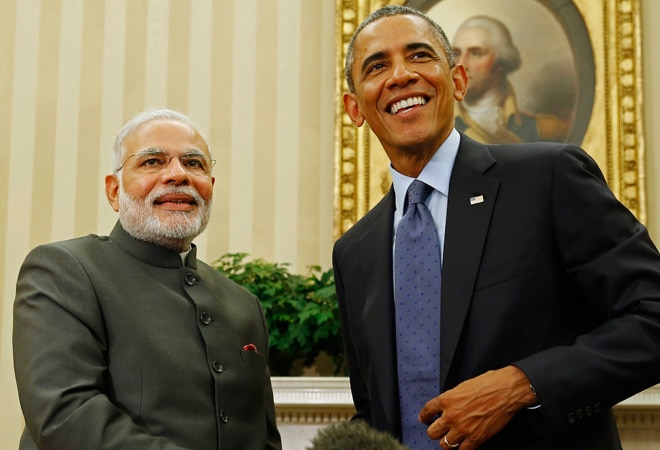 Prime Minister Narendra Modi and US President Barack Obama end their meeting in the Oval Office of the White House in Washington (Photo: Reuters)

With their landmark 2005 civil nuclear deal still in limbo, the government and the United States have established an inter-agency Contact Group to sort out outstanding liability and technical issues to fast-track its full implementation.

Prime Minister Narendra Modi and US President Barack Obama, while taking note of the delay, reaffirmed their commitment to implement fully the US-India civil nuclear cooperation agreement that would facilitate installation of American-origin nuclear reactors in the country.

From the domestic side, the inter-agency Contact Group will have representatives from Department of Atomic Energy, Ministry of External Affairs and Finance Ministry.

After summit talks with the US President, PM Modi said both sides were serious about resolving issues blocking the implementation of the civil nuclear deal at the earliest.

"Both of us are committed to taking forward the civil nuclear partnership agreement. We are serious about resolving at the earliest issues relating to civil nuclear energy cooperation. This is important for India for meeting energy security needs," he said.

Significantly, names of two US companies Westinghouse and GE-Hitachi have been named in the joint statement which is considered unusual.

Modi and Obama established a Contact Group on advancing the implementation of civil nuclear energy cooperation in order to realise early their shared goal of delivering electricity from US-built nuclear power plants in the country. They looked forward to advancing the dialogue to discuss all implementation issues, including but not limited to administrative issues, liability, technical issues, and licensing to facilitate the establishment of nuclear parks, including power plants with Westinghouse and GE-Hitachi technology, the statement said.

Vikram Doraiswami, Joint Secretary (Americas), in the Ministry of External Affairs, said the Contact Group would resolve the outstanding issues relating to nuclear trade between the two countries.

We are setting up an inter-agency Contact Group to be able to resolve all issues that are outstanding and hindering the rapid deployment of US-origin nuclear reactors in the country, that includes specific mention of liability, it includes administrative issues and it includes technical issues, he told reporters while briefing about the Modi-Obama meeting.

The Indo-US nuclear deal concluded between the previous UPA government and the George W Bush administration has been stalled because of issues relating to liability laws.

The government has ruled out diluting the Civil Liability for Nuclear Damage Act and hoped a solution to the stalemate caused by foreign companies not agreeing to two of its clauses will be found within the framework of the legislation.

The US has wished to see that India was aligned with the International Convention on Supplementary Compensation for Nuclear Damage (CSC).

Maruti reports 4.6 per cent rise in car sales for Sept