After the Prime Minister's five-day US trip, the ice had been broken, a meandering relationship re-energised, and the partnership resumed. 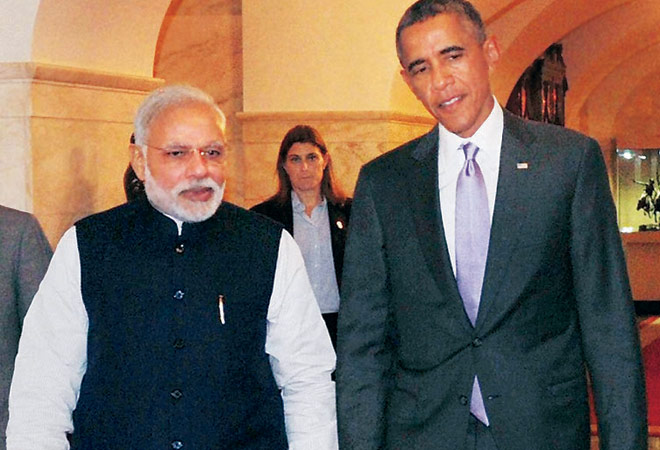 Prime Minister Narendra Modi with US President Barack Obama at the White House.

He went, he saw, he reset. It was Mission Accomplished as a longer-than-usual summit meeting with US President Barack Obama and a comprehensive joint statement after it completed Prime Minister Narendra Modi's five-day US trip. The ice had been broken, a meandering relationship re-energised, and the partnership resumed.

As Obama departed from schedule to drive to the nearby National Mall for a walk with Modi around the Martin Luther King Memorial immediately after their two-hour summit meeting, the great reset seemed to have been set in stone. A good beginning had been made over dinner on Monday evening, with Obama greeting Modi in Gujarati; the official follow-through went just as well.

"This visit has reinforced my conviction that India and US are natural global partners," Modi said in a joint statement at the Oval Office of the White House after the meeting. The main takeaway from the summit was an agreement to make joint and concerted efforts to dismantle safe havens for terror and criminal networks like Lashkar-e-Taiba, Jaish-e-Mohammad, Dawood Ibrahim's empire, al Qaeda and the Haqqani network. The two leaders also agreed that the two countries will take steps to disrupt financial and tactical support to these terror outfits. Officials clarified, however, that there will not be any joint operations but joint steps to dismantle the support structure of these terror groups.

The other takeways from the summit included a joint pledge to push the bilateral relationship to new levels, resolve issues blocking implementation of the civil nuclear deal. As the two leaders covered a broad range of issues including economic cooperation, trade and investment, Modi made it a point to seek continued openness and ease of access for Indian services companies to the US market. The two countries also reached an agreement on extending their defence cooperation for 10 more years, and Modi invited American companies to participate in Indian defence manufacturing sector.

The discussions, the first formal meeting between the two leaders spread over delegation and restricted levels, covered terrorism in South Asia and emerging threats in West Asia. Modi expressed the hope that India-US relations will make fast progress. "Both of us are committed taking forward the civil nuclear partnership agreement. We are serious about resolving at the earliest issues relating to civil nuclear energy cooperation. This is important for India for meeting energy security needs," he said. The Indo-US nuclear deal concluded between the previous Manmohan Singh government and the Bush Administration has been stalled because of issues relating to liability laws.

Sharing concerns over the threat of terrorism in South Asia and emerging challenges in West Asia, where Islamist group ISIS has been on the rampage, Modi said the two countries agreed to intensify cooperation in counter terrorism and intelligence sharing. Obama said the two leaders had discussed various issues including trade and economic cooperation, cooperate in exploration of space and scientific developments especially to deal with challenges like Ebola.

Emphasising that India supports trade facilitation, Prime Minister Narendra Modi today told US President Barack Obama that a solution must be found on its concerns over food security at the WTO. Modi had an open discussion on WTO (World Trade Organization) issue with Obama during their summit talks where a host of other topics including economy were also discussed. "We had an open discussion on WTO issue. We support trade facilitation but a solution that takes care of our food security must be found," Modi said, adding he was "sure that it is possible to do that soon".

India took a tough stand on food security issue at the WTO Geneva talks in July. The country refused to ratify WTO's Trade Facilitation Agreement (TFA), which is dear to the developed world, without any concrete movement in finding a permanent solution to its public food stock-holding issue for food security purposes. It has asked WTO to amend the norms for calculating agri-subsidies in order to procure foodgrain from farmers at minimum support price and sell that to poor at cheaper rates. The current WTO norms limit the value of food subsidies at 10 per cent of the total value of foodgrain production.

Modi presented a Gujarati tribal art painting to Obama, a Pashmina shawl for Michelle and necklaces with tribal art for Maria and Sasha. Modi has also invited Obama to visit India at a convenient time, which has been accepted by the White House. "I look forward to receiving President Obama and his family in India at a convenient time," Modi said. The details of the visit would be chalked out at a mutually convenient time. If Obama visits India in the rest of his tenure, he would be the first US President to visit India twice. He visited India in November 2010.